Last week, I watched this incredibly stupid, badly acted, big budget piece of crap called F9. It’s currently a bit of a joke on the internet, with memes featuring Vin Diesel saying “family” all the time. It’s appropriate — the movie was noise, and occasionally Diesel would occasionally piously say “Family” as if it was sufficient justification for driving cars in outer space. Hated it. 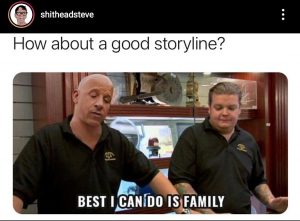 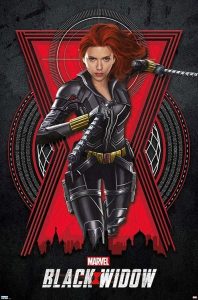 So this week, I saw Black Widow, which, strangely enough, actually is about family. The story starts with a “fake” family of Russian spies hiding in the United States — the father, Alexei, the mother, Melina (the smart one, a scientist), and two daughters, Natasha and Yelena, adopted as part of their cover — while Melina steals American (that is, Hydra) mind control secrets. The family is torn apart at the beginning of the movie when their cover is blown, and they all have to frantically flee to Cuba, where they are separated. Alexei gets thrown into a Russian prison for life, Melina is buried away in a secret lab run by the chief villain, Dreykov, and the two girls are taken away to something called the Red Room, a secret and brutal training room for ninja super-assassins who are all mind-controlled by Dreykov. Natasha later breaks free and defects to the US, joining the Avengers and appearing in a number of big budget superhero movies, the American dream.

That’s the setup. That’s the foundation for the whole plot. From that point on, it’s more James Bond than classic superhero movie: Dreykov has planted his mind-controlled female assassins all over the world, controlling them from his base, the Red Room, and Natasha, the Black Widow, must smash his nefarious plans and free all of his mind-slaves. Along the way, she’s going to find the scattered, disaffected members of her family, and together they will learn to live, laugh, and love as a true family, while blowing the shit out of everything.

I joke, but the movie works best if you view it as a family drama between the four principle actors (who actually can act! And do a good job with the story) surrounded by explosions and fights and an improbable giant flying super-villain fortress. All the interesting moving parts of the plot are wary conflict between two sisters, Natasha and Yelena, the uncovering of the hidden deep affection their spy-scientist mom had for them, and how they rescue their bumbling, blustering dad, who turns out to be Russia’s version of Captain America. That all works. I enjoyed watching those four interact.

I guess the super-spy/super-hero parts of the plot also worked. At least, there were many spectacular action set-pieces, and there was a spectacularly violent conclusion, and there were many fast-paced fight scenes with lithe beautiful women kicking butt. If that had been all there was, though, I would have left the theater feeling “meh”, instead of carrying away a residue of affection for Natasha, Yelena, Melina, and Alexei. That’s what made the film.