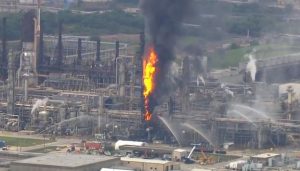 I have to say I’m happy with this outcome, I think, but I don’t have the foggiest idea what was done or the mechanics of the process. I guess there was some kind of rebellion within ExxonMobil, and the good guys won.

ExxonMobil shareholders voted Wednesday to install at least two new independent directors to the company’s board, a resounding defeat for chief executive Darren Woods and a ratification of shareholders’ unhappiness with the way the company had been addressing climate change and its lagging financial performance.

The votes were part of a day of reckoning for an oil and gas industry already struggling over how to deal with climate change. In Europe, a Dutch court ordered Royal Dutch Shell, considered one of the more forward-thinking companies in the industry, to make deeper-than-planned cuts in greenhouse gas emissions. And in the United States, Chevron lost a shareholder vote directing the company to take into account its customers’ emissions when planning reductions.

The balloting at the storied oil giant ExxonMobil “sends an unmistakable signal that climate action is a financial imperative, and leading investors know it and are demanding change,” said Fred Krupp, president of the Environmental Defense Fund. “This is a watershed moment for the oil and gas industry. It’s no longer tenable for companies like ExxonMobil to defy calls to align their businesses with decarbonizing the economy.”

Near as I can tell, the disparate groups who are major shareholders in ExxonMobil had a big vote to decide who was to lead the company. These voters are people outside the company who own many shares of stock, in the form of things like hedge funds and pension funds, and they flexed their muscles and forced ExxonMobil to take a more aggressive position on protecting the environment. They were led by a hedge fund called Engine No. 1, which owned 0.2% of the stock, and I’m already exhausted from trying to figure out how this works, so don’t ask me how such a tiny shareholder could have that much influence. I can cope with the twisty business of molecular genetics, but high finance baffles me.

The court decision is entirely separate for the ExxonMobil internal coup.

Separately, a Dutch court on Wednesday ordered Royal Dutch Shell to cut its carbon emissions by 45 percent by 2030 compared with 2019 levels in a landmark case brought by climate activist groups. Shell said it would appeal. The Hague District Court ruled that the Anglo-Dutch energy company has a duty to care about reducing greenhouse gas emissions and that its current reduction plans were not concrete enough.

I would like to understand how this all happened, but it sounds like growing public awareness of the danger of climate change is percolating upwards and finally having a material effect on these companies that directly control the flow of carbon.

One of the ardent supporters of the Engine No. 1 slate said the hedge fund found eager supporters because of the widening realization that climate change is a financial issue.

“Investors are no longer standing on the sidelines hoping for the best,” said Simpson. “Climate change is a financial risk, and as fiduciaries we need to ensure that boards are not just independent and diverse, but climate-competent.”

Ah, that’s what we need more of.

Q was just the beginning, now it’s preparing to metamorphose into its next form! » « “A happy ending is ultimately had by all in this delightful if politically incorrect concoction”