What a buffoon. To respond to a colleague who posted support for civil rights for LGBT folk, she had to put up a big loud stupid sign of her own, demonstrating her own ignorance.

She doesn’t have a clue what the science is. Here’s Keith L. Moore, publishing in JAMA in 1968, in an article titled “The Sexual Identity of Athletes”, pointing out that sex is more complicated than a simple binary. 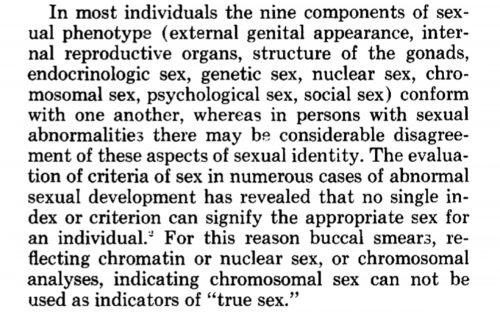 In short, there are 9 (at least) parameters that are diagnostic of sex, and they aren’t always in concordance with one another. For the majority of people, they are in alignment; for some, though, they aren’t, and you can’t deny them their rights.

I despise those people who swaddle themselves in the cloak of science in the name of claims that are explicitly denied by science. Greene is a liar and a fraud.

Is there some kind of epidemic of stupidity right now? » « The lure of the exotic! Adventure awaits!