I checked in on my latest video, and the first thing I see is an ad stuck on the beginning, an ad for this nonsense: 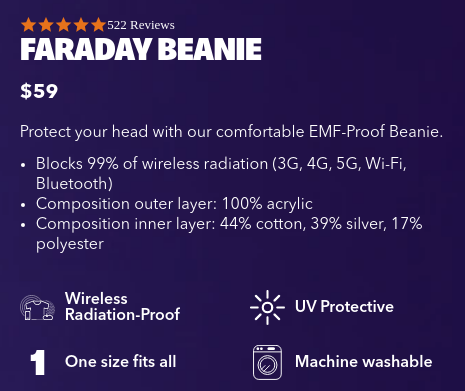 It was cheaply made and cheesy, with bad audio and bad lighting and bad video, of a guy going on and on about how this beanie will block 3G, 4G, and 5G electromagnetic waves because it has silver threads woven into it, and how those waves will fry your brain and make you nauseous and sick and cause cancer and who knows what else. It’s pure quackery. Google must be desperate if they’ll sell ads to these kinds of cheap charlatans, and market snake oil to the kind of audience that would watch my cheap & cheesy videos.

If you’re mourning the death of Rush Limbaugh, you’ve revealed how rotten you are » « Grocery shopping in Minnesota is exactly like this thumbnail