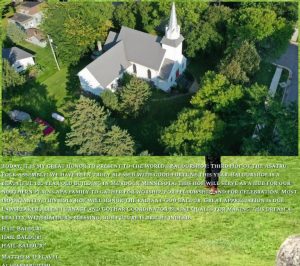 The white supremacists have opened a church just down the road from me, about 40 minutes down the road, between Benson and Willmar. It’s another religion, Asatru. Here’s how the SPLC describes it:

A neo-Pagan religion drawing on images of fiercely proud, boar-hunting Norsemen and their white-skinned Aryan womenfolk is increasingly taking root among Skinheads, neo-Nazis and other white supremacists across the nation.

Asatrú leaders have opened prison ministries in at least five states recently, and their many jailed followers are heavily white supremacist.

Here’s how they describe themselves:

The Asatru Folk Assembly was formed by Stephen McNallen in 1994 as a successor to the Asatru Free Assembly, which dominated the Asatru scene in the United States from its inception in the 1970’s until its dissolution in 1986. Since it’s inception, the AFA has been the premier force in the development and practice of Asatru. The AFA is committed, today and everyday, to building strong and lasting communities and families, embracing traditional values and venerating our holy Gods.

In the late 1960’s, Stephen McNallen embraced the Gods and founded the modern religion of Asatru. In short order, Alsherjargothi McNallen started the Viking Brotherhood which quickly evolved into the Asatru Free Assembly. The Asatru Free Assembly began publishing “the Runestone” magazine as well as starting the first Asatru gatherings called Allthings.

Asatru grew and developed throughout the 1970’s and 80’s. In 1986 the Asatru Free Assembly was disbanded. In the late 1980’s and early 90’s the original values and aims of Asatru were growingly subverted by the decay of cultural marxism [emphasis added] Alsherjargothi McNallen knew he must once again take up the banner and save what his vision and initiative had put into motion. The Asatru Folk Assembly was founded from that day forward to be a solid spiritual force for our Ethnic European Folk and our Ethnic European Faith.

That “cultural marxism” remark is a dead giveaway — it’s a racist, right-wing organization.

For completeness sake, here’s a link to their website. I don’t recommend reading it, because it was designed to kill you. ALL-CAPS white text on a background photograph of light green grass and grey-white stones? OMG, that alone convinced me to embrace cultural marxism. My ancestral forebears apparently had no design sense at all.

Fruit of our evening walk » « Violent anarchists, where are your standards?