At least some people think “war” is the proper metaphor for a pandemic, but these tend to be the same demented loons who think poverty, drugs, crime, and disease all have to be dealt with as a “war”. I think it’s overused and inappropriate myself. But then you see some of the shell-shocked victims and you realize that, at least for some people, this is a battle.

I wouldn’t want to be a doctor or a nurse right now. Those are important jobs, and I don’t think I could handle the pressure.

We aren’t even anywhere near the peak yet, either. This is going to get worse before it gets better.

March 25 curves from @FT's @jburnmurdoch
1. The US death curve slope even continues its steep course, passing Iran and now headed towards China's
2. The US has overtaken the rest of the world for cases; the absolute total N will soon exceed China and reach 100,000 by week's end pic.twitter.com/lDDJZ4sR3t

We aren’t prepared. Hospitals are running out of PPE gear; this New York hospital is improvising gowns with trash bags. That’s got to help patient confidence, I’m sure. 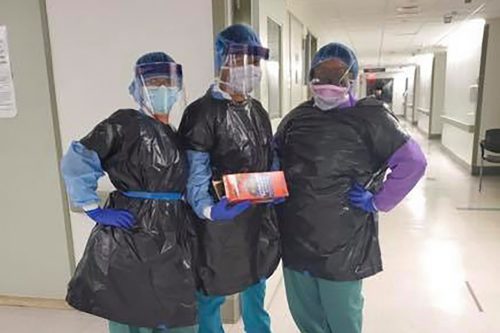 Meanwhile, Jerry Falwell Jr is reopening the Liberty University campus and encouraging students to return. The University of Minnesota Morris has not done that, because we can see the trends in the data and actually think it’s more important that our students stay healthy than that we curry favor with a delusional president.

Even worse, Governor Tate Reeves of Mississippi has explicitly countermanded all the local limitations in his state.

One of the immediate consequences of Reeves’ order is the formal declaration that most of Mississippi’s businesses qualify under it as “essential,” and thus are exempt from restrictions on public gatherings. As of press time, the Jackson Free Press has received reports from businesses in the Jackson area that have, as of today’s executive order, scuttled plans for work-from-home and ordered their employees back to work on-site.

You are hereby ordered to mingle, Mississippians.

I suggest that, after all this is over, that Tate Reeves, Jerry Falwell Jr, and Donald Trump all be held accountable for every death from COVID-19 on their watch. They belong to the “party of personal responsibility”, after all.

Take health care out of the hands of insurance companies NOW » « WASH YOUR HANDS!