I keep hearing that the various social media services were going to start cracking down on disinformation. If that’s the case, why is Dennis Prager still around? His latest “fireside chat” is just an old ignorant man sitting around lying about the coronavirus.

It’s both sad and horrible. I lasted about ten minutes, roughly half of which is Prager talking about his dog. In the remainder, he made 3 stupid points. 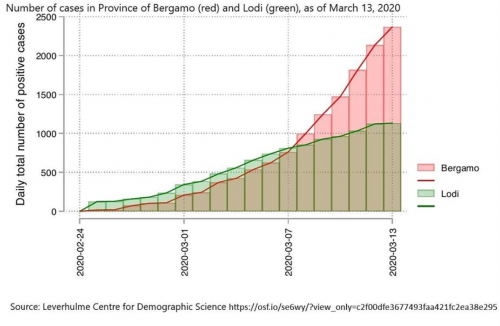 Carl Zimmer: Here is a new, real-world demonstration of how social distancing and other measures can flatten the Covid-19 curve. The city of Lodi had the first Covid-19 case in Italy, and implemented a shutdown on Feb 23. Bergamo waited until March 8. From Oxford University, https://osf.io/fd4rh/?view_only=c2f00dfe3677493faa421fc2ea38e295

That’s the kind of data officials looked at before making a calm decision. There was no panic. Prager is lying and misrepresenting the situation.

Prager has billionaires backing him, though, and he can be as stupid and dangerous as he wants, and YouTube will continue to take his money.

I throw a terrible party » « Let’s try that again