The latest Gallup poll is interesting. 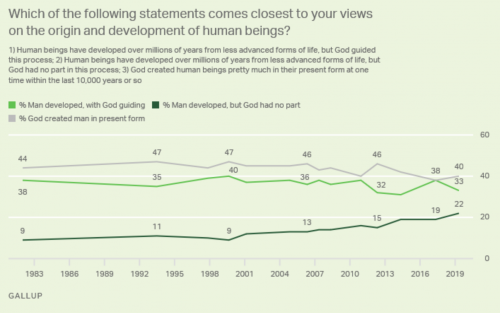 The anti-science, evolution-denying creationists have had an uptick (the grey line). I’d guess that’s due to radical conservativism experiencing a triumphal moment right now — a rising tide of sewer sludge fills the hip-waders of all the wacky denialists.

That uptick seems to have come entirely at the expense of the theistic evolutionists (the green line) who have lost a smidge of popularity.

Despite the slight rise of creationists, the godless evolutionists (the dark green line, the color of our heart’s blood) are still rising! Again, I’ll credit that to, in part, our current political polarization. Although I’d like to claim that better education on the subject is helping, too.

All of these shifts are slight, and shouldn’t be over-interpreted.

The latest findings, from a June 3-16 Gallup poll, have not changed significantly from the last reading in 2017. However, the 22% of Americans today who do not believe God had any role in human evolution marks a record high dating back to 1982. This figure has changed more than the other two have over the years and coincides with an increasing number of Americans saying they have no religious identification.

We might be edging upwards, but it’s a nail-biter with the final innings far off in the distance.

Today’s spiderwalk: featuring a patch of prairie » « It’s a maternal time of year