It’s going to be another day delving deep into more spidery domains, and then I see this news about another threat, a new species of tick invading the US. 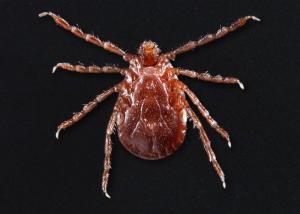 Tick sampling using corduroy drag cloths found Asian longhorned ticks on the patient’s manicured lawn, some of them in direct sun. More were found in the park across the street from the patient’s house, both in open, cut grass exposed to direct sun and in taller, shaded grass next to the woods. Testing also found ticks on a nearby public trail, in mowed short and midlength grass near the trail edge, both in full sun and partial shade. The discovery of the ticks near the man’s house were the first known collections in New York state.

The authors wrote that finding the ticks on manicured lawns and in open sun may be significant, because public education efforts often stress that Ixodes scapularis ticks—the most common biting tick in New York state—are found in wooded areas or shaded grass.

At least my area of interest right now is dark, shadowy, dusty, cobwebby, and hot, so I’m not going to panic. My long-term plans include expanding into lawns and gardens, though, so I’ll keep this in mind for next year.

Another day of spider-hunting! » « The story that atheism will never live down