This is going to be amusing. A small group of white men are planning a “straight pride” parade for Boston in August.

“Straight people are an oppressed majority. We will fight for the right of straights everywhere to express pride in themselves without fear of judgement and hate. The day will come when straights will finally be included as equals among all of the other orientations.” – John Hugo, President of Super Happy Fun America

It’s three bros with a website who think they are oppressed. For being so diamond-hard straight, they’ve strangely chosen Brad Pitt as their “mascot”, presumably without his permission. They have made a flag. 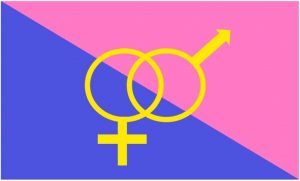 They are so danged rigidly straight that they’ve looped all the way around to gay, themselves. I expect their parade (with floats!) will either be the campiest event in Boston, or will simply droop in pathetic impotence…which will be fine with them, since if no one joins in their limp effort, it will be evidence that they really are persecuted!

Oh, wait! They had a Straight Pride Parade in Seattle last year!

One guy showed up.

He brought balloons, though. Totally worth it for balloons. 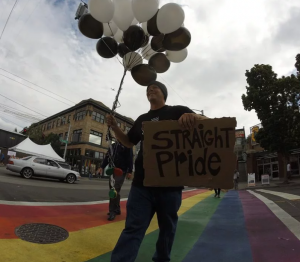