Here’s a site calling itself “A People Map of the US, where city names are replaced by their most Wikipedia’ed resident: people born in, lived in, or connected to a place.” It’s a concept that might have some promise, except that instead you discover a list of celebrities in politics, movies, and most of all, sports, where the connection to the location is often extraordinarily tenuous. For example, here’s my region of West Central Minnesota. 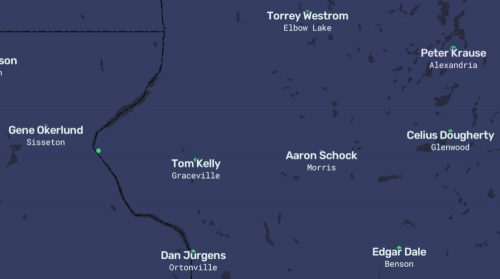 I didn’t recognize any name, except Westrom — he’s the Republican representative for my district, I can’t stand him, but it’s fair that his name is up there. For Morris, on the other hand, it’s some guy named Aaron Schock. I never heard of him. He’s never in any of the local papers. I looked him up, and learn that he was born here and moved to Illinois at a young age. So what is he famous for?

Schock resigned from Congress in March 2015 amid a scandal involving his use of public and campaign funds. A subsequent congressional ethics investigation “revealed that he used taxpayer money to fund lavish trips and events”. In November 2016, a federal grand jury indicted him in connection with the scandal. After he pled not guilty, prosecutors reached an agreement with him in March 2019 whereby all charges against him were dropped. As part of the deal, Schock’s campaign committee, Schock for Congress, pleaded guilty to a misdemeanor count of failing to properly report expenses.

He got into Wikipedia for being a crooked politician, and the Wikipedia entry mentions where he was born, and that’s it. Now this map tars the town with him, because it has such sloppy criteria for inclusion.

Oh, well. Take a look at your hometown, maybe you’ll be lucky and discover some worthy who actually has some substantial connection to the place. Probably not, though.

Godzilla! » « The hero we need