Rangers in the Northern Territory found this lovely beast, a three-eyed snake, which is particularly interesting because the eye is so well formed, and it’s unlikely to be the result of a secondary fusion of two embryos. Something just triggered the formation of another eye near the midline of the cranium. 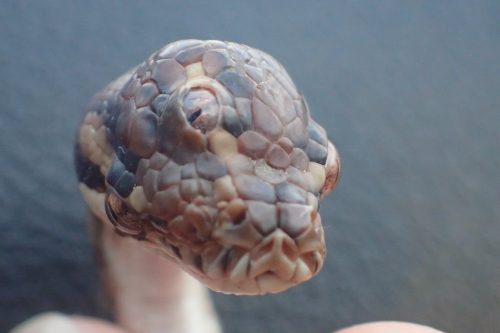 Unfortunately, it didn’t live long. That extra eye was an obstacle to feeding.

Also unfortunate is the speculation in the comments. This is not likely to be the result of a mutation — mutations don’t work like that. It’s also not likely to be a direct effect of a teratogen. Most likely is that there was an environmental insult of some sort to the early developing head that caused ectopic production of a morphogen signal. I doubt there will be a wave of similar defects appearing all over the snake population (although I confess it would be kind of cool if there were).

Least likely is the idea that this is a sign of the apocalypse, or that white walkers are going to march out of Timor or New Guinea to descend on Australia.