I’ve been seeing examples of those old bills of mortality going around — the lists of causes of death, week by week, in 17th century London. I thought you should know you can go straight to the source and find all the death statistics you could dream of. It’s shocking how often infectious disease is slaughtering people — plague, fever, tiffick (tuberculosis), cholera, spotted fever, smallpox, the French pox, etc. — and you wouldn’t want to be an infant, they were dropping like flies. 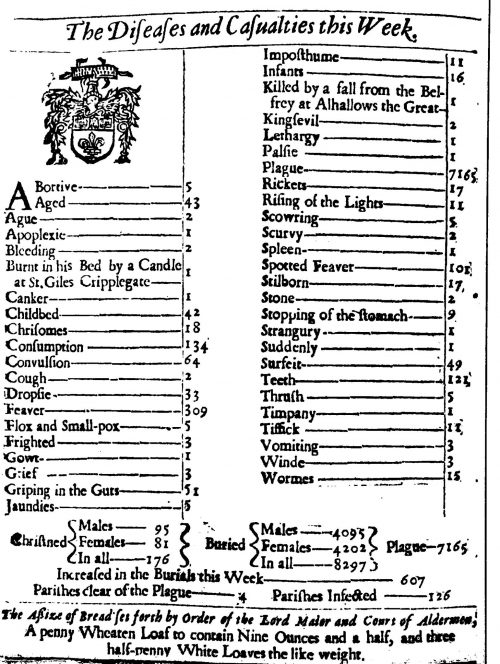 What’s interesting, too, is what isn’t killing them. Cancer is rare. You can find an occasional murder (or rather, “murther”), but it isn’t common. Gun deaths are noted with details (“Shot with a pistol at Saviours Southwark”) and are less frequent than executions. Everything else was killing them first. Apparently, if you really hated someone back then, it was a greater revenge to sit back and wait for them to die a miserable death from worms or a bloody flux.

There are definitely some advantages to living in the 21st century.

Faception is phrenology for the 21st century! » « A frighteningly Nietzschean idea: we’ve been training superwomen!