The Quinault nation has some of the most beautiful land in the country, a long strip of the coast of Washington state. It’s one of my favorite places to visit, and if I had my druthers I’d be there right now. Heck, I’d be there all the time, although as a non-Native I’d probably have to live a little further south, like my brother who lives near Grays Harbor. But I’d visit those beaches frequently! 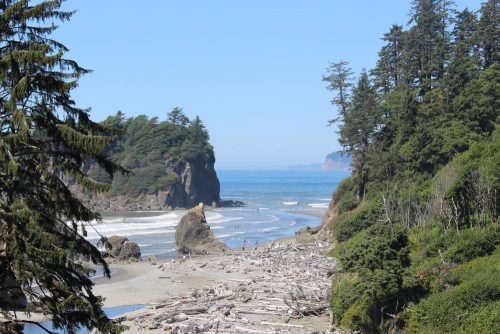 But don’t be fooled. Like everywhere in the country, hate is rising, and Indians are one of the targets.

Hate crimes or abusive behavior against Native Americans, while rarely gaining much public attention, appear to be quite common. According to a joint 2017 study by NPR, the Robert Wood Johnson Foundation and Harvard University, 39 percent of Native Americans surveyed reported they had experienced offensive comments about their race or ethnicity. Meanwhile, 34 percent said they or a family member had experienced violence for being Native.

Barbara Perry, who conducted one of the first national studies on hate crimes against Native Americans, said few of these kinds of incidents ever get formally reported to the authorities. Perry said victims have grown weary of being ignored or seeing their cases bungled.

“They’ve come to the point where they don’t see the value in reporting,” said Perry, who has written a book on hate crimes against Native Americans and is a chairperson for the International Network for Hate Studies.

Read the whole story, which focuses on the murder of Jimmy Smith-Kramer, a Quinault native who was intentionally run over by a drunk white man in a pick-up truck. The attitude seems to be part of American culture.

In 2013, the Quinault Nation sued several local school districts, accusing them of discriminating against tribal students by dissolving the local athletics league and barring tribal teams from competing in local athletic contests. The exclusion was not only a racist snub, the tribe alleged, it damaged the chances of tribal athletes in the Taholah School District of being seen by college scouts looking to sign up scholarship athletes. The banning of tribal teams came after years of the athletes enduring taunts and slurs.

The suit alleged that dissolving the athletics league violated the Equal Protection Clause of the 14th Amendment, as well as Title VI of the Civil Rights Act, which prohibits agencies that receive federal money from discriminating on the basis of gender, race, color or national origin.

“The racial harassment and disparate treatment to which Taholah student-athletes have been subjected is severe, pervasive, and objectively offensive,” the suit claimed.

According to the suit, tribal children had been called “dirty Indians,” “wagon burners” and “sand niggers” at games hosted by Mary M. Knight High School, a defendant school where the student body was 93.9 percent white.

Two job openings, and we aim to fill them NOW » « David Berlinski crawls out of his spider hole to sneer at science