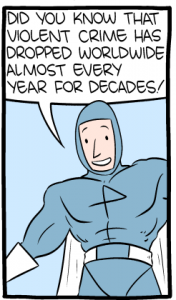 I’m sure all the fans of Pollyanna Pinker will love Progress Man, the hero for our times.