A new poll shows that the number of creationists has declined to a new low. Hooray! Party time!

Except that the new low is 38% of the American population. 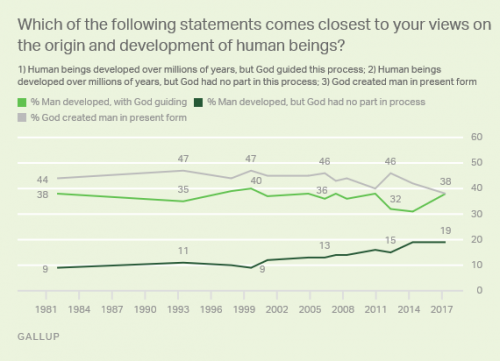 Oh, sure, it’s better, and the trend is going in the right direction, for now, but that’s the kind of percentage that can get a bad president elected. It’s not a majority, but it’s not a fringe group, either. It’s shocking that our citizens can reach adulthood and still be that ignorant.

We’re also supposed to be consoled by the fact that a university education helps some. “Only” a quarter of college graduates are creationists! You go through 4 years of solid advanced education in a first world technological nation, and still a fourth of them come out thinking there might be some merit to the idea that the Earth winked into existence sometime at the start of the Naqada culture in Egypt, or the Uruk era in Mesopotamia. Oh, and hey, the Assyrians must have been shocked that everyone went extinct (except for 8 people) right at the start of their empire. Must have been a small empire.

How did this guy become a darling of the conservative skeptic/atheist movement? » « It’s always even worse than you can imagine