Mike Hughes has built a steam-powered rocket, which is kind of cool. It takes some skill to assemble that kind of thing.

Mike Hughes does not trust in science, which is kind of stupid. 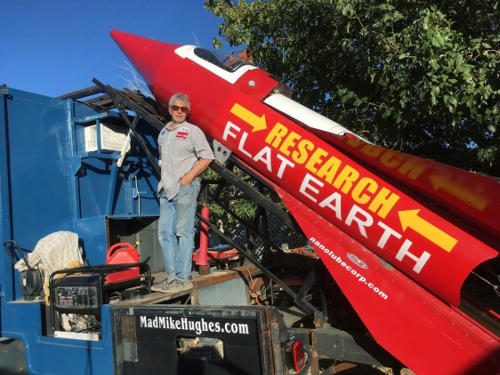 According to the AP, Hughes says he expects his new rocket to hurl him through the skies above the Mojave Desert ghost town of Amboy at up to 500 miles per hour for roughly one mile, attaining a peak altitude of 1,800 feet before it deploys two parachutes. Hughes is a proponent of the Flat Earth theory; the Research Flat Earth group is his main sponsor. Hughes does not “believe in science,” which he told the AP has “no difference” from science fiction.

Now that is a curious statement, because he claims to be doing this stunt in order to test a scientific claim, that the earth is round, which means he is purporting to do this for a scientific purpose. If he actually knew anything about how science works, though, he’d be able to think this through and realize that launching himself 1800 feet in the air to snap a picture a) doesn’t actually test his hypothesis that the earth is flat, and b) has been done safely and intelligently many, many times before. He could attach his camera to a weather balloon that could easily loft itself to 100,000 feet and take many pictures.

So this exercise makes no sense at all, and will probably get him killed. He launched himself before for a shorter distance and came out physically wrecked from the acceleration and the rough landing. Now he’s pumping up his steam rocket for even more acceleration.

What an absurd way to commit suicide, for such a pointless purpose.