The things one learns long after the fact…when I was a boy, my father had a favorite fishing spot, an oxbow in the Green River north of Kent, Washington, where we lived. It was a lovely place, a little bit of a walk from the road, but you were surrounded by river and trees and grass. I remember well this one trip where we’d been spectacularly successful and had caught a pair of 10-12 pound steelhead, and we were walking back to the car; I was carrying one of the fish, my fingers hooked in the gills, Dad was carrying the other, and my brother Jim was carrying the tackle box, and he saw this thick trickle of dark red blood dripping over my fingers and down the flank of the steelhead, and he puked all over the tackle box. He always had a delicate stomach. I also used to tease him about how he’d get seasick on ferry rides.

Of course, then when he grew up he got a job as a commercial fisherman and spent all his time on a heaving boat in the North Pacific hauling in massive quantities of aquatic beasties, so he’ll probably deny that event.

Anyway, those were good times. The site also had a crumbling wreck in the middle of it, an old school that was decaying walls and broken windows surrounding a gutted interior. My father wouldn’t let us go anywhere near it. He didn’t like the place at all; he’d name it with a little snarl, because it apparently had an ugly history with people who grew up in Kent in the 40s and 50s. I vaguely recall being taunted by other kids about being shipped off to Briscoe if I was bad, but that was about it. All I knew was that it was a step above a ruin, and there was a statue of Jesus in the courtyard, which I was surprised to see erected in the Catholic churchyard in town some years later.

The place was called the Briscoe School for Boys. It was a Catholic reform school where the delinquent kids were sent. That was all I knew about it. A bit out of the way, good fishing, decaying building, occasional whispers of dislike from my parents’ generation. 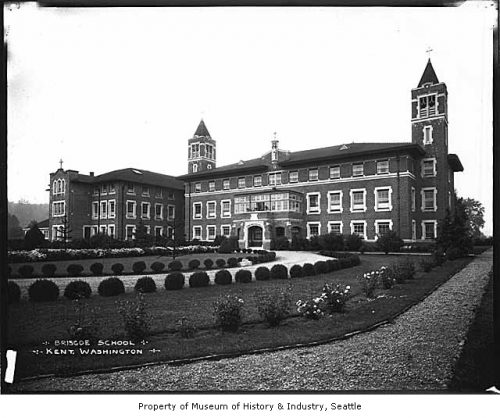 That’s an impressively oppressive sorta Gothic building to have been plunked down in a small farming town in the Pacific Northwest. I guess the long reach of the Catholic Church meant all kinds of nightmares were assembled in out-ot-the-way places. Even now, the small town I live in in Minnesota has a Catholic history, with the Sisters of Mercy building an Indian boarding school right here in the middle of the prairie. It’s as if some malignant cosmic entity has sprinkled Stephen King bait all across the country.

It was just last tonight that I stumbled across the story of the place. It was founded by the Christian Brothers of Ireland — and you already know what horrors dwelt there, just from that name. Hogwarts it wasn’t; it was a torture factory.

Decades ago, society was much more accepting of corporal punishment, the men alleging abuse acknowledge.

But what happened to them at Briscoe “weren’t beatings, they were torture,” said John Green, a 59-year-old technology consultant who lives near Everett and boarded at Briscoe in the 1950s. “It continued into self-gratification and rage. It had nothing to do with punishment.”

The brothers carried leather straps — about a foot long and an inch or two wide — with which they hit students, the men say.

Jerry Blinn, 65, a retired business manager in Placitas, N.M., said students were punished for anything from getting wrong answers in class to talking in meal lines.

He said one brother would strap students so hard his feet would leave the ground. Blinn, who was sent to Briscoe in 1946 after his widowed, ill and impoverished mother was unable to take care of him, said some brothers also grabbed students by their ears or cheeks and shook them “like a bass on a hook.”

Davison, of Seattle, who ended up at Briscoe about 40 years ago after he ran away from home, remembers being beaten with straps and fists — sometimes so hard he was knocked unconscious. “They beat me half to death there,” he said.

He and some of the other men say they saw brothers beating naked boys with wooden paddles in the showers, and that some brothers had students fight each other.

“It was a truly brutal place,” said Earl Dye, 60, a mental-health counselor in Seattle whose mother sent him to Briscoe around 1955 at the urging of nuns. “In the morning, you would think: ‘I hope I don’t get beaten today.’ And every night you would hope you wouldn’t be one of those boys that the brothers would pull out of bed.”

Several of the men say they would sometimes see brothers take one or two boys out of their dorm-room beds for a while at night.

Pat Gogerty, retired executive director of Childhaven, a local agency serving abused and neglected children, said that happened to his brother, William Gogerty. William lived at Briscoe from about 1937 to 1945. Once, when Pat stayed overnight during a visit, he saw a brother take William out of the room.

“He was gone for a while,” Pat Gogerty said. “He didn’t talk about what happened (then). In those days, you never talked about anything like that.” Years later, his brother told him he had been sexually abused at Briscoe, starting from his first day there at age 8.

Jesus. I had no idea. I’ve known of the Christian Brothers, an evil cabal of self-righteous perverts and sadists, but I always associated them with other places, other countries. But they’d set up shop in my hometown and had creeped out my father years ago? Eerie. Survivors of sexual abuse are still talking about went on there. And what is it with the Catholic Church building prisons for young boys all around the world, and staffing them with psychopaths?