I was going to point and laugh at Donald Trump for hanging a fake Time magazine cover in his golf clubs, but then I realized — we all fake this stuff to inflate our egos. Right? Perfectly normal. Entirely natural. 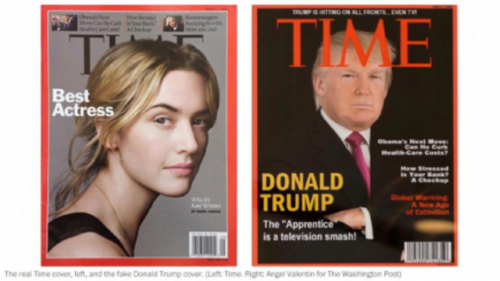 I mean, I’ve got photos of my 3 kids hanging on my wall at home. Two of them are totally fake (I won’t reveal which). I’ve been inflating the number of children I have just to make myself seem more virile. But then, you all claim to have more kids than you really do, I’m sure. It’s ordinary human behavior.

I’m supposedly able to drive, but — true confession — I actually don’t have a driver’s license. I posted a photo of Tom Selleck that I downloaded off the internet onto my library card. We all do it. My wife has a photo of Jennifer Aniston taped to her credit card, it fools all the police who’ve stopped her for her autograph.

My degree? It came out of a Cracker Jack box (not the regular size, though, you have to invest in the super-duper economy sized box, obviously), but it’s good enough. Impressed everyone who gave me this job, after all.

Having pathologically engorged narcissistic tendencies is simply part of the human condition, as I’m sure you all agree. It’s normal. You can’t condemn Trump for lying, you know, or being an egomaniacal buffoon, especially since Obama faked being president for a whole eight years, and nobody complained about that.

The sad story of Laci Green » « Those under-appreciated carbohydrates