I’m used to hearing complaints that those damned immigrants, especially the Muslim ones, are bringing White America down. How about when the shoe is on the other foot, though? Minnesota has a lot of Somali immigrants who are predominantly Muslim, and recently it’s in the news that there is a small epidemic of measles sweeping through that community, because they’re not getting properly vaccinated. Must be some religious thing, right?

Wrong. It’s homegrown Western ignorance. It seems the Koran doesn’t have much to say about autism or vaccinations, but once you move to America, the parasites descend upon you and fill your head with lies about how your kids will be all horribly autistic if you protect them against contagious disease.

So worried Somali-Americans got lectured at by Mark Blaxill. Who is he, you might ask?

Blaxill is not a scientist. Nor is he a doctor, though he plays one at SafeMinds. Blaxill is a former businessman turned spokesperson for the anti-vaccinationist movement (Vice President of SafeMinds). Fancies himself a self-made expert epidemiologist. In the grips of extreme confirmation bias (science doesn’t support his views, hence scientists are probably mislead by their own personal interests — having no clue as to how a controlled experiment is carried out).

Liar, crank and conspiracy theorist (Big Pharma is out to get us — Blaxill actually terms it the “autism holocaust”), as discussed here; also a professional shifter of goalposts (without necessarily being aware of it himself).

Among his most prominent techniques are faking statistics to show an explosion in autism the last thirty years, and looking at new studies to determine whether they are scientifically “solid” or not (meaning he determines whether they can be interpreted as agreeing with his lunacy or not).

Oddly, he doesn’t look Somali or Muslim. He is going to kill people with misinformation, though. 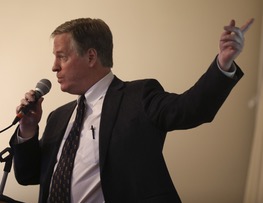 The Army has enough trouble » « Almost done with genetics!