Today involved getting up at 4am to take a cab to the airport, a couple of connections, and then landing at the Minneapolis airport — where I now await the shuttle back to Morris, which doesn’t leave for a few hours, will take a few hours, and if it’s anything like the shuttle we took to get here, will be an icebox that will threaten me with frostbite all afternoon.

But it was all worth it! I got to spend a day in balmy New York City, and I spent most of my time with Iris, who took me on a tour of vegan restaurants on Manhattan. Turns out there are a few. (Don’t worry about the squirrels, since this was a vegan tour we eschewed giving them their deserved reward, this time). 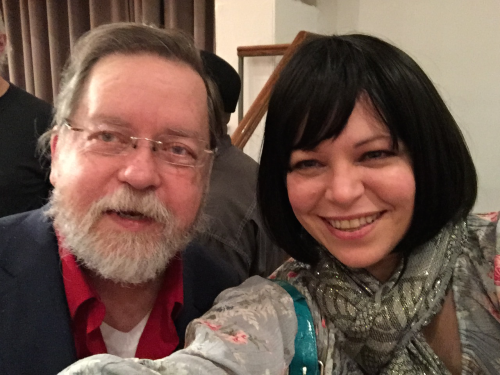 Then we realized that alcohol is vegan, so we stopped for a little warmup. It was a phenomenal way to savor the big city.

And then it was time to go to Cooper Union, where we speechified and organized to RefuseFascism.org. It was a great event: a diverse and ferocious crowd — you could hear the rage out there — and I gave a short speech and Iris was asked to read a message of support sent by Gloria Steinem. The whole thing was recorded, so you can watch it right now if you’ve got a few hours to spare. I was one of the first speakers, and once you get past me, it just kept getting better and better. I recommend Jeremy Scahill‘s scathing denunciation of the whole damn system if you want to get your blood boiling. 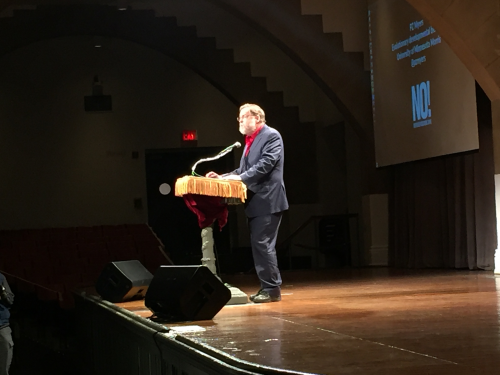 And then we went out for beer, as all revolutionaries do, and made a few plans that will emerge later. Finally it was a scant few hours of sleep, and here I am, about to climb into an ambulatory freezer. I’d do it again!