Here we go again, another session of Christians complaining about atheists…specifically, these danged “New Atheists” who don’t show the proper respect that the old atheists did. And of course they start with an annoying definition.

I have a couple of friends who are New Atheists and have had conversations with several more. If you haven’t run across them, New Atheism is a sort of grassroots movement among atheists that has gone beyond holding the position that no god exists to the position that theism is actively bad for the world and that atheism should “evangelize” actively to move people away from theism and religion. The movement is spearheaded by the writings and stylings of Richard Dawkins, Christopher Hitchens, Daniel Dennett, and Sam Harris.

There is no “New” Atheism. It’s the same as the Old Atheism. And the Old Atheism was just as strident and just as annoying to the believers as anything we do today — this is just the usual attempt to silence people by shaming them with the imagined good behavior of their predecessors, where that good behavior is simply the imagined ancestral silence. It’s not true. Bertrand Russel was assertive about his beliefs, and so was d’Holbach and Diderot. We ‘evangelize’ by plainly stating our views, nothing more; you don’t see us legislating to ban Christian churches or trying to infiltrate theology into classrooms.

All that has happened is that the ongoing secularization of society has removed some of the stigma from atheism, and more people are speaking out (which has its downsides, since it also means more ignorant people are hopping on the bandwagon). It’s a sign of poor comprehension of modern atheism that the author tritely names Dawkins, Hitchens, Dennett, and Harris, as if they are at all representative. They aren’t. Clearly, he has picked up a label from the Christian literature and is happy to stuff it with the same old cliches.

This is the same phenomenon we see in American race issues, where the past is given a rosy glow, everyone is told to be nice like that uncontroversial gentleman, Martin Luther King Jr., and the message is supposed to be to sit down and shut up and be deferential like King was…and all we learn from that is that the hectoring person is totally ignorant about what was actually going on.

Recently, my good friend, Christian brother and ad hoc accountability partner, and business partner Travis told me about a book: The Atheist Who Didn’t Exist. While there are a few bits and bobs that I’m not sure work out, I heartily recommend the book as a whole. It was obvious to me that the author had actually had numerous atheist friends that he took seriously (many of which disavowed the excesses of New Atheism) and was well acquainted with the talking the points of the new movement and why they tend to be pretty weak.

I’ve actually read that book! It’s awful. Let me give you two examples of the author’s cluelessness.

The first chapter is about those atheist buses in London — you know, the ones with the signs that said “There’s probably no god. Now stop worrying and enjoy your life.” He first recounts a supposedly amusing anecdote about his friends calling him up in a state of shock at this remarkable development. Atheists! Promoting themselves!

The author objects, because the slogan, despite its friendly pink letters, is an example of a really bad argument. Wait a minute, you might say, what argument? It’s not making an argument. It’s stating a conclusion, and explaining that this causes us no trauma. It’s undercutting a common Christian claim, which the author then demonstrates on the very next page.

What’s new about the “New Atheism”? As many have pointed out, not so much its arguments, which tend to be old ones, as its tone — which is one of apoplectic anger.

Right. Because you see that bus sign, and the first thing that comes to mind is apoplectic anger. The author then goes on to compare the makers of the bus sign to big-haired televangelists and calls them preachy and hectoring. It’s dishonest. When even a light-hearted message is given, Christians will whine about it’s tone — you can’t win with someone who’s that determined to distort everything.

The second example of the many I could give if I were doing a substantial review of this piss-poor book, is a complaint about a common argument that shows that he really doesn’t get it.

Indeed, claims such s “You’re only a Christian because your parents were!” have always smacked to me of desperation, on a par with “You’re only pessimistic because you’re English!” It’s also an ill-tempered Rottweiler of an argument, for it can quickly turn around and bite your own hand; after all, if it were true, it would apply to atheists, too.

Jesus. Exactly! That’s the whole fucking point! We are all products of our environment. One is Christian, not because there is some objective empirical evidence for its truth, but because it is a subjective experience which is shaped by your family, your friends, your culture as a whole. One is an atheist because of a constellation of experiences shape our beliefs — I, for instance, am steeped in science and naturalism, and that impels me towards atheism. I don’t pretend that the nonexistence of gods was something that jumped out at me in a revelation, without precedent and without a whole truckload of baggage.

The whole book goes on and on in this vein. Each chapter begins with a jokey anecdote, usually involving a humorous conversation with an imaginary friend (a Christian specialty), followed by a complaint about something an atheist said, which then leads to a “refutation” that only reveals that the author completely fails to comprehend the atheist point of view at all. Really, it’s a total waste of time unless you really want to have a lot of examples of how stupid Christian philosophy can be.

But back to the original link, where our clueless Christian resumes whingeing about those New Atheists, after revealing the rotten state of his sources of information on New Atheism.

This has been my experience as well – that the New Arguments of the New Atheists tend to be Pretty Bad. It actually makes me long for the days of Old Atheism when atheists were self-critical and pragmatic about their atheism. But why is this? Why is this particular brand of atheism so much more strident in its claims and so much worse about being able to substantiate them?

This should be obvious and predictable: none of these Pretty Bad arguments are going to actually be stated, let alone argued against. This is not to claim that there are no bad atheist arguments — there are some awful ones — but if you’re going to rail against the failure of atheists to back up their claims, you ought to cite at least a few rather than simply taking it as given. But at least he tells you the name of a lazy anti-atheist book that he claims has the refutations, even when it doesn’t!

Instead, he’s going to cut straight to his primary contention. Think you can guess what it is? Hint: think slack. Think tired old cliche. Think projection.

Yep. He’s going to complain that atheism is just another religion! Yay! Let’s all go take a nap.

But my contention is primarily this: New Atheism is the New Secular Fundamentalism.

Nope, sorry. This is just sloppy thinking. It’s just the old playground rebuttal, “No, you are!” All he’s going to do is list a bunch of things he doesn’t like about fundamentalism, and declare that atheists are just the same.

But I’m not going to play that game. It’s a standard Christian avoidance tactic.

Look, here’s the thing. Most of us aren’t atheists because we just translated our old church experience into godlessness, for arbitrary reasons. We didn’t invent atheism because we wanted a new religion. Some of us are atheists because religion really was poisonous to us: we saw hatred and pettiness and sanctimonious authoritarianism, and we wanted nothing to do with it. Those things do crop up all too often within atheism, because they are human failings, but it’s not because we are intentionally trying to recreate them.

Some of us, like me, are atheists because religion provides nothing we want, is unsatisfactory at addressing what we do care about, and is really, really bad at answering a very human question, “Why?” Instead, they prefer to make tirades against the other, ignoring their own failings, and pretending that the questions they ignore have been answered.

You want to know what those New Atheists, who are the same as the Old Atheists, are all about? We actually have important questions.

These question will not and cannot be answered by religious apologists. The process of exploring them honestly is exactly what leads to atheism, so they have to avoid them. Far easier to complain that atheist bus signs have a bad tone, or that gosh, isn’t it rude of those atheists not to want to be forced to pray, or that there are bad arguments in atheism. You don’t get to complain about the latter until you address the fact that all of the arguments at the core of every religion’s beliefs are total flaming bullshit.

Oh, was that rude of me? So it was. I will not bestow upon lies an unearned respect.

One more thing I have to point out: religious people are oblivious to what we find rude. Take a look at this survey that assess what Christians think atheists will find uncomfortable, vs. what actually makes atheists uncomfortable. 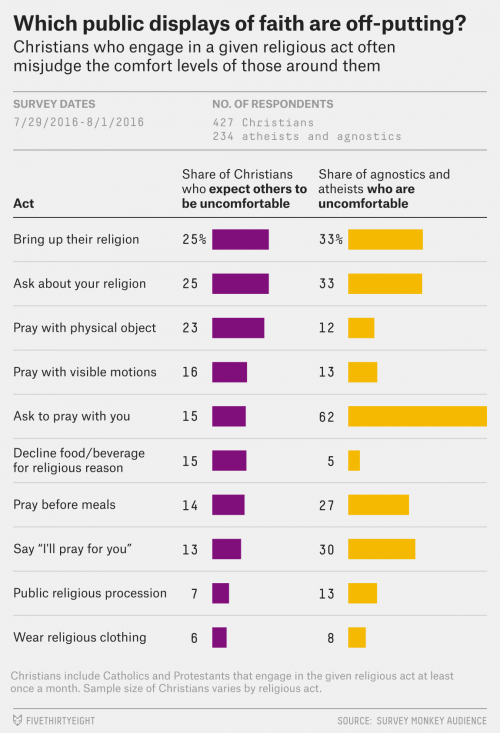 Do you detect a pattern? We’re generally fine with you doing whatever you like within your religion. Where we get annoyed is when you insist on dragging us into it. You want to pray? Go for it. Oh, you want to turn a family meal into a communal thank you to an imaginary being? No thanks. You want to pray with me? Fuck off now, please.

And if you’re going to demand perfection in every atheist argument, I think the least you can do is provide a little of the same consistency and rationality to your faith-based babble, but one thing I can trust you to reliably do is to avoid the problem. But then, Matthew 7:3-5 is one of those verses Christians always conveniently forget.