Ray Comfort has this new cheesy “movie” in which he claims he destroys atheism with one scientific question — which reviews revealed was where did the DNA molecule come from? I explained that that was not very challenging and was actually a rather stupid question. But now he’s got new ads out that present a completely different question. 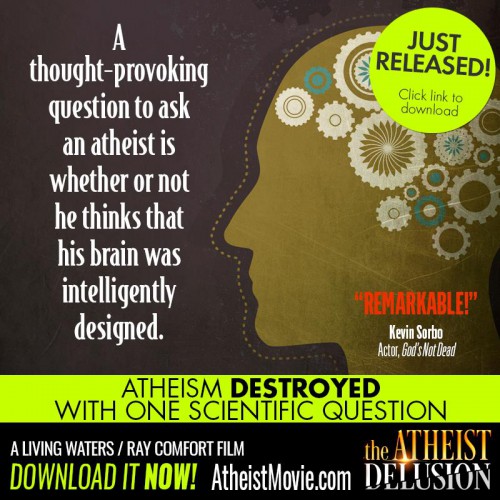 A thought-provoking question to ask an atheist is whether or not he thinks that his brain was intelligently designed.

Well, that didn’t provoke much thought now, did it? All I have to do is look at Ray Comfort, who has the same kind of brain I have, and it’s obvious that if it were designed at all, it was done badly. Alternatively, I could look at a chimpanzee and see that its brain is smaller but otherwise very similar to mine, and it’s obvious that we have a modified generic ape brain, which is a kind of mammalian brain, which has all the hallmarks of a standard vertebrate brain.

If the whole premise of his movie is that he’s got this killer question that will rock atheists back on their heels, why is it that every question that’s leaking out of it is just kind of pathetic? Doesn’t he try out his question on informed subjects to see how they really react to it before he builds an entire movie that claims he has some kind of potent approach?

Discuss: Moments of Political Madness » « Minnesotans! You have an election on Tuesday! Vote!