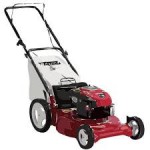 Here’s a story of a gun-fondling nitwit compounding mistake upon mistake.

First, he thinks his hobby of shooting bullets at things very fast is fascinating enough that he brings along someone to record his manly bang-bangs.

Secondly, he has a target: a lawnmower. Why a lawnmower? Does he just hate yardwork? Maybe it was an evil lawnmower.

Thirdly, the lawnmower is not sufficiently exciting, so he packs it with three pounds of high explosives.

You know, lawnmowers on their own can be dangerous: when running, they can send rocks flying; I once had a lawnmower blade break in normal operation, and a chunk went flying and imbedded itself in a tree. But at least this guy didn’t have it running. I don’t think. Then, of course, there’s the problem of firing a rifle at a solid metal object, the engine. I would think there’s some risk of ricochets there.

But no, all that is irrelevant. He packed it with explosives. All the other safety concerns become moot.

He shot it, it exploded, sharp pieces of metal went flying everywhere (surprise!), and shrapnel severs one of his legs.

He did something incredibly stupid, but didn’t deserve maiming. Maybe someone will learn that demolishing stuff with firepower isn’t entertaining or clever, though.