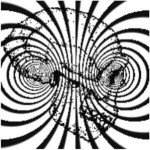 I haven’t been following Vincent Fleury’s escapades for some time. You may recall Fleury — he’s a woozily litigious crackpot who tries to explain all of development and evolution with swirling fluid vortices and claims that he has a hydrodynamic explanation of transiton from apes to humans, and threatened to sue me for criticizing his ludicrous scientific claims. I’ve heard through the grapevine that he’s also threatened to sue other people for pointing and laughing at his ideas, but he really has no grounds for a claim since he’s still employed at Paris-Diderot University, and doesn’t seem to have any problems getting his work out there.

If anybody is in Lille, France, and planning to go, let me know about it. It sounds very entertaining. Also on the program is Marc Henry, a quantum chemist, who’s going to talk about the physics of how water can retain a homeopathic memory, and Bernard Poitevin, a student of Bienveniste, who will explain the role of water in the process of realization of the homeopathic remedy, and Etienne Krencker, an anthroposophist. Those still exist? Wow.

Nope, no one’s ever going to suggest Fleury is part of a community of kooks, no sir.

I anticipate some more bluster and threats of lawsuits over pointing out his associations. He really doesn’t like me very much.

The Old Guard at Science is quelling modernization, I fear » « #TheTriggering lies limp and unable to perform