I read this good essay from the American Humanists. I agree with it, but I have some problems with it. I can do that; I have one foot in the atheist camp, and the other in the humanist camp.

Humanists are cultural progressives. When you make decisions based on rationality and scientific research, with an added dose of empathy, the effective answers to the issues of our day are the progressive answers. Science-based sex education is proven to be more effective than abstinence-based sex education. A strong middle class is best for a stable, resilient economy. Health care for all extends quality of life and strengthens economies. The civil rights of all must be protected because the only justification for seeing women and racial minority groups as inferior comes from bronze-age holy books and other outdated ideas. People who support progressive ideals most often do so because they see positive results and understand cause and effect.

While atheists and humanists reject the existence of any gods for lack of evidence, atheism and humanism are not synonymous. Most atheists and humanists are good people, but atheism in and of itself is not supported by an ethical system to guide behavior. Not all those who don’t believe in a god have fully moved past societal prejudices and old programming—and not all have cultivated empathy in a way that engenders compassion for others and builds a sense of egalitarianism.

Here’s my problem: the characterization of atheists is false.

I say that even though a lot of atheists will eagerly agree with it. Atheism doesn’t have a moral code, they will say, it’s nothing but the absence of a supernatural moral authority. That’s what they tell themselves, anyway, but it’s all a lie — they’re humans, and they’re simply loaded with moral assumptions. You cannot get away from them. Atheists have a tendency to declare that logic and reason are their sole moral absolutes (which in itself is a kind of moral code), and then, in an unsurprising twist, explain that their particular beliefs, no matter what they are, are the product of their logic and reason, and are therefore good. The same circular logic we laugh at in biblical rationalizations is just fine when we do it.

So we get a kind of free-for-all. Atheist dudebros, for example, can claim that Libertarian selfishness is the only rational ethical stance, that science is the arbiter of all truth, and that because the social relationship of men and women is the product of evolution, it is optimized to support male dominance and female submission. They do have an ethical system to guide their behavior! It’s a thoroughly fucked-up system, but really, they’re not all sitting there in a moral void, objectively pure and unbiased. They’re actually operating under a whole set of premises, largely unexamined and often superficial, with a goodly dollop of motivated reasoning propping them up.

I like science, too, I know humans evolved, and I think logic is an excellent tool. It’s just that I also appreciate other ways of seeing the world (they’re inevitable, since we’re not robot clones), see evolution as a chaotic clusterfuck of chance with a ribbon of selection providing multiple ways forward, and also know that logic is a great tool for false rationalizations. Probably the most logical, successful, long-lived human institution on the planet is the Catholic church, and they are masters at using logic to back up odious, false, and harmful decisions.

So please, stop giving atheism the blank check they want, the claim of an absence of any kind of moral imperatives or any prior suppositions. It isn’t the case, it’s only that they want to pretend to have an absence of priors so they can assume the mantle of objective, bias-free decision making, which, by the assumptions they claim that they don’t have, makes their moral decisions superior.

It also drives me up a tree that whenever anyone proposes that atheists ought to recognize the consequences and obligations of their ideas, there will always be some pissy wanker who’ll tell them they should go join the humanists, because atheists don’t do that. Yeah, atheists do do that — it’s just that they prefer that their implicit biases be invisible. Humanists at least try to make the framework explicit.

There’s another thing that bugs me. This cartoon is a mashup of Calvin & Hobbes comic illustrations with quotes from the novel Dune. The quotes are in praise of individualism. 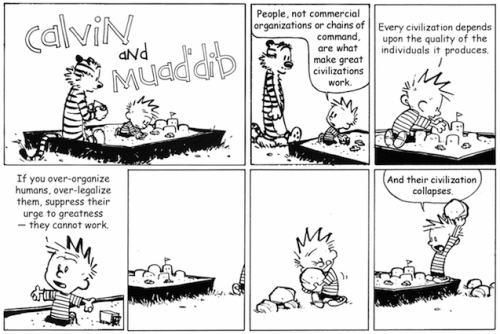 People, not commercial organizations or chains of command, are what make great civilizations work.

There is a truth in there. Ultimately, it’s people who do the work. But institutions enable or disable their endeavor. Good schools, for instance, are essential to give people the tools to do great things; and the greatest people in the world can be trapped in futility by institutional poverty or racism.

That cartoon represents a very common atheist way of looking at things. We don’t need structure or ideals or even other people; we are all individuals! My greatness is mine and mine alone! And yet the people saying those things are often privileged, middle-class Americans who have benefited every day of their life from social structures that favor them and give them the ability to live up to their potential.

I am also an atheist, and I’ve had lifelong advantages because of where I come from and because of the support of social institutions. Tempting as it is to abandon the institution of atheism (and it is an institution, a movement, a framework for thinking) and just say everyone ought to be a humanist, I can’t. There’s more than one way to live a godless life, none of them involve becoming an unfeeling computer, and I refuse to allow atheists the pretext of lacking a moral code. I think we’re better served by making it explicit and open.

Some organizations get it » « #MakeDonaldDrumpfAgain