At last, I understand human evolution. It’s all here in this painting. 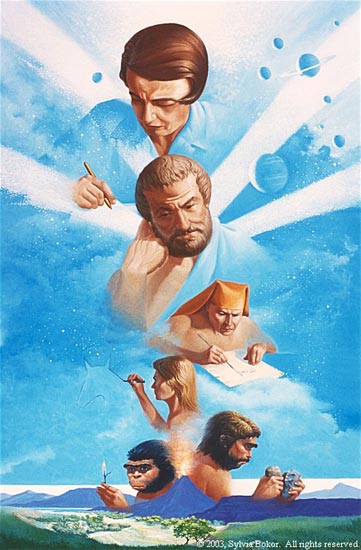 Working from bottom to top, we witness the ascent of man. First, Homo erectus discovers fire, and stares at a burning twig. This was easier than it sounds, since all he had to do was light it from the volcano erupting over his left shoulder (there’s always a volcano, and it’s always erupting, in these things). If anyone has ever gone on a camping trip with those atavistic boy scouts, you will recognize his expression.

Next, Neandertals invent rocks. Two rocks at once…it’s a triumph!

The next big leap: men invent shaving and art. The subtle revelation in this image is that Cro-Magnon men were also all bronies — notice that he’s drawing a pony.

Civilization arises! Our representative man has invented writing and hats. He has not yet invented shirts, however, and I suspect that what he’s writing is My Little Pony slash fiction. It takes time to progress.

Then, Aristotle. Man has forgotten how to shave. He has, at least, evolved to the point of having half a shirt — clearly, a transitional form. Of course, the most important thing is that he has invented Thinking, or at least, staring vacantly while scratching his neck. He could be thinking about My Little Pony, but at least he’s not being obvious about it anymore.

Darkness follows. The next two and a half thousand years are unimportant and nothing of consequence happens until, at last, with a coruscation of light beams, Ayn Rand invents planets and stars while scribbling Libertarian rape fantasies with Objectivist rationalizations.

In the next phase (not shown), humans worship the god-like Rand to the point of paying $14,000 for cheesy paintings that portray her as the pinnacle of evolution, and thus begins the Fall of Man.

I have to weep at this Art. It tells a grand tragic story.

Everything you need to know about the Minneapolis police » « Jebus, Sam Harris again