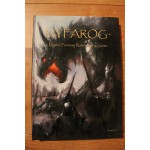 I haven’t played a role-playing game in decades. I enjoyed them, but…no time, and as you all know, I have no friends and am universally despised, so no one to play them with. And now I have another reason to not play at least one of them: it sucks. There’s a new RPG out called Myfarog, which looks unplayable, and is written by a proud racist who sees RPGs as a rehearsal for the coming collapse of Western Civilization. At least it gets away from the tired old stereotype of evil Orcs, and instead has you facing hordes of evil Jews.

It’s strange how half the internet seems to be complaining about “political correctness”, yet there doesn’t seem to be any significant suppression of some of the foulest crap, from Myfarog to Donald Trump, anywhere. In fact, it’s like a golden age of shit everywhere!

Don’t go under Duntsch’s knife! » « Not quite there yet