Here’s a good Christian attitude for you. 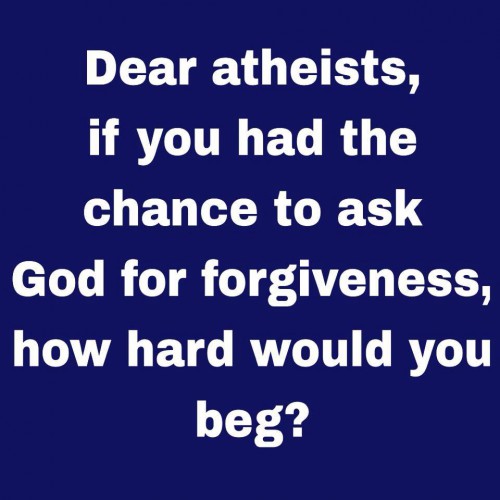 A lie in the first word. This is not an affectionate message; using “dear” in a salutation is inappropriate.

If you had the chance to ask God

Which god would that be? The wrathful being who cares very much about my genitals, or the vaporous phantasm who retreats every time we ask one of his followers to explain his actions? Because in the first case, I’m dead, my genitals are rotting in the ground back on Earth, and I don’t have to care about his approval (not that I ever did anyway), and in the second case, a good hard glare will make him fade into nothingness.

Forgiveness for what? Existing? Doing the best I can to get by? Not stoning gay people, not believing in a magic man who lived 2000 years ago, eating shellfish?

how hard would you beg?

I guess this isn’t a very benign deity you’re talking about, that he expects people to grovel before him.

My honest answer? I don’t know how I would react if I encountered your psychopathic thug of a god. If there were such a thing as an all-powerful super-being who confronted me, I know I’d be afraid, especially if he were threatening me with torture if I disagreed with him, and eternal enslavement if I obeyed him. I’d probably also feel despair that this was the nature of the universe, a kingdom ruled by a hateful tyrant.

Your scenario is telling, though. Here’s a comparable and somewhat more believable one: you are awakened in the night by a large, muscular man holding a knife to your throat and screaming, “BEG FOR FORGIVENESS!” at you. What do you do?

I’d be terrified. I might whimper out “Please don’t kill me.”

But what I wouldn’t do is feel love for this man, I wouldn’t praise him, I wouldn’t tell everyone else what a wonderful person he was.

Fortunately, there is no such person threatening me, and I don’t feel that fear.

But what about you, Southern Baptists for Todd Kincannon? You believe with all your heart in the existence of the angry tyrant with a knife at your throat. Why do you love such a being, and demand that others also adore him?

Also, you don’t get to fall back on that “God is love” bullshit. You’ve just told us atheists that this god would demand that we beg him for forgiveness, which isn’t exactly loving. You also say,

However way they ask Him for forgiveness, it better be on their goddamn KNEES.

You clearly imagine a cruel and demanding god. Why worship it?