Airline pilots. I was surprised.

Quartz ran an article in which an investigator discovered that pilots were often using prohibited equipment to take photos of the cockpit, the scenery, the view as they were landing, all actions which are prohibited by the airlines. Just as we passengers get told there are certain gadgets we have to shut off or put in airplane mode during phases of the flight, the crew has even more stringent requirements — they’re, for instance, required to maintain a “sterile cockpit” with no electronic distractions at all during take-off and landing.

Yet the pilots and copilots are happily uploading photographs taken when regulations say they aren’t allowed to use their GoPro or iPhone. It seems fair to me to point out that pilots are flouting the rules; you could make an argument that perhaps the rules are a little too restrictive, but you can’t deny that the pilots are breaking them.

The pilots went insane, and have been harassing and threatening the reporter who tattled on them.

I hope some aviator (whether it’s me or not is immaterial) gets to throat-punch you for Christmas, is a typical Facebook comment. Hell, just thinking about it makes me feel all warm inside. Eat shit and die.

That’s a lot of macho bluster — I would hope the airlines would instantly fire a pilot who punched a passenger in the throat. But this is more subtle and chilling. 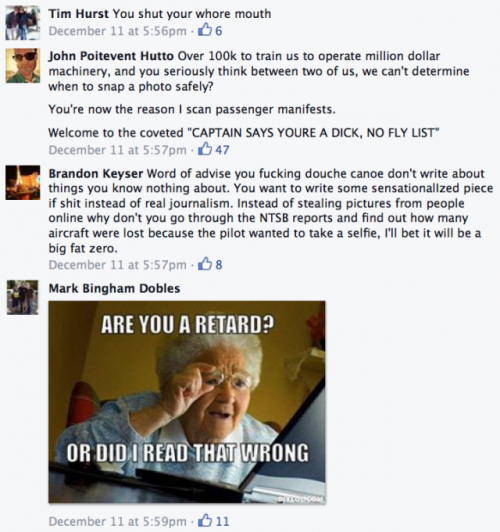 So pilots can just throw paying passengers off on a whim? They talk about scanning manifests for people they don’t like, of putting people on no-fly lists, just generally harassing anyone they disagree with. Furthermore, looking at the forums these angry threats were taken from, you get the distinct impression that all pilots are assholes. I hope that’s not true, but man, this is a PR disaster for their profession.