The image below is a phylogram, illustrating the degree of variation in a sequence of mitochondrial DNA. The concept is fairly simple: if two DNA samples are from individuals that are evolutionarily distant from one another, they’ll have accumulated more differences in their mitochondrial DNA, and will be drawn farther apart from one another. If the two individuals are closely related, their DNA will be more similar, and they’ll be drawn closer together. That’s the key thing you need to know to understand what’s going on.

There are other, more complicated analyses going on in the figure, too: the branching pattern is determined by analyzing subsets of shared sequences, and it takes a fair bit of computing power to put the full picture together. You’ll just have to trust me on that one, but all you need to know is that the branches are objectively calculated, and that the distances between the tips of the branches and their last branching point tell you something about the degree of genetic disparity in the group. 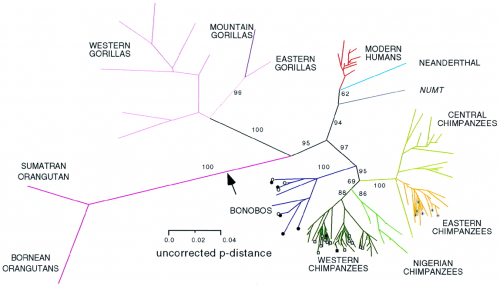 Isn’t that a lovely family tree? You can see that the orangutan branch is a long, long way from the human branch, as expected, and that the chimpanzee and human branch point is closer to us than to the point where gorillas diverge from chimpanzees and human, also as expected.

But look at the modern humans, in red. We’re a sadly cramped little cluster; there may be a lot of us individuals, but we’re all relatively closely related. Modern humans only arose roughly 100,000 years ago, and our branch expanded numerically fairly rapidly, but we haven’t had all that much time to accumulate as much genetic variation. We’re a close-knit side branch of the primate family tree, or we ought to be close-knit — we’re brothers and sisters together.

We’re definitely set somewhat apart from Cousin Neanderthal, the light blue line. But even there, the range of genetic diversity is pitiful compared to the chimpanzees.

The exuberant flowering of the chimpanzee lineage, all those blue and green and orange lines, tells us that these come from deep, distinct populations. All those beings we just lump together as chimps are actually genetically diverse, representing multiple long-established lineages — Central Chimpanzees are more different from Western Chimpanzees than we are from Neanderthal. Western Gorillas are far more distant from Eastern Gorillas than any branch of the modern human tree. The orangutans of Sumatra and Borneo, two islands separated by a few hundred kilometers, show far greater genetic differences than Chinese and African humans.

The patterns of descent we see in that stunted bud of humanity may be real, but they’re tiny when compared to the grand bouquet of chimpanzee genetics. So how can we fight over the few small superficial differences that mark human races? I guess we’re just really good at squabbling with our brothers and sisters.

Douthat to the rescue of marriage! » « The Hobbit is ten years old