While we’ve all been pleased to see the courts enforcing minority rights by striking down restrictions on same sex marriage, the flip side also happens: the Supreme Court has now ruled that abortion protesters can’t be restricted by a ‘buffer zone’ around clinics. Their rationale is some nonsense about “sidewalk counseling”.

Some of the individuals who stand outside Massachusetts abortion clinics are fairly described as protestors, who express their moral or religious opposition to abortion through signs and chants or, in some cases, more aggressive methods such as face-to-face confrontation. Petitioners take a different tack. They attempt to engage women approaching the clinics in what they call “sidewalk counseling,” which involves offering information about alternatives to abortion and help pursuing those options. Petitioner Eleanor McCullen, for instance, will typically initiate a conversation this way: “Good morning, may I give you my literature? Is there anything I can do for you? I’m available if you have any questions.” If the woman seems receptive, McCullen will provide additional information. McCullen and the other petitioners consider it essential to maintain a caring demeanor, a calm tone of voice, and direct eye contact during these exchanges. Such interactions, petitioners believe, are a much more effective means of dissuading women from having abortions than confrontational methods such as shouting or brandishing signs, which in petitioners’ view tend only to antagonize their intended audience. In unrefuted testimony, petitioners say they have collectively persuaded hundreds of women to forgo abortions.

So the court recognizes that many protesters use “aggressive methods”, but they side with the sweet little lady who claims to be kindly offering pamphlets, rather than with the women who are being frightened away from medical care. If there is a buffer zone, poor Ms McCullen is denied her right to be condescending, but if there is no buffer zone, patients are denied the right to seek legal medical treatment without harassment.

But I wonder how the court deals with the stark reality that abortion clinics need volunteer clinic escorts to help women get through the lines of shouting protesters? Isn’t the fact of their existence evidence that there is a problem with access? Apparently not. The escorts are the problem.

…theBoston clinic uses “escorts” to greet women as they approach the clinic, accompanying them through the zones to the clinic entrance. Petitioners claim that the escorts sometimes thwart petitioners’ attempts to communicate with patients by blocking petitioners from handing literature to patients, telling patients not to “pay any attention” or “listen to” petitioners, and disparaging petitioners as “crazy.”

It’s great when the courts are on the side of justice, but not so great when you’ve got bought & paid-for clowns of the reactionary right, like Roberts and Scalia, calling the shots.

This is amusing. The Supreme Court is surrounded by a rather restrictive barrier. 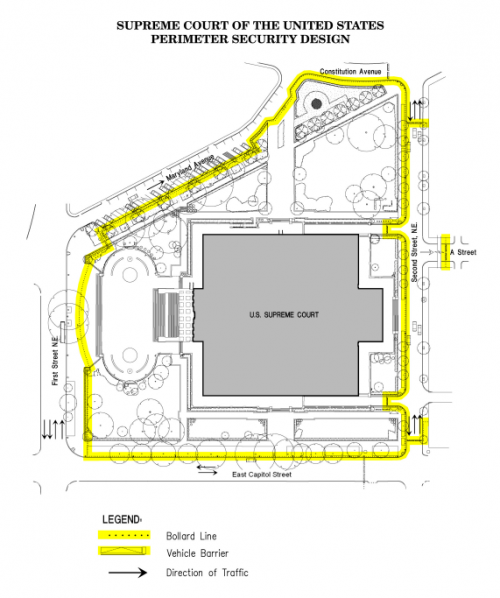 But what if I want to give the justices some ‘sidewalk counseling’?

Now that’s a good message » « It’s not an omen, really