It’s true — I’ve heard a lot more about student protests of commencement speakers this year. At the Twin Cities branch campus of my university, for instance, there was an eruption of student activism over inviting war criminal Condoleeza Rice to give the commencement address — although part of the protest may have been over the fact that she would have been paid $150,000 to spew a few platitudes for 20 minutes.

We may have been missing the point. Zach Weinersmith explains the situation. 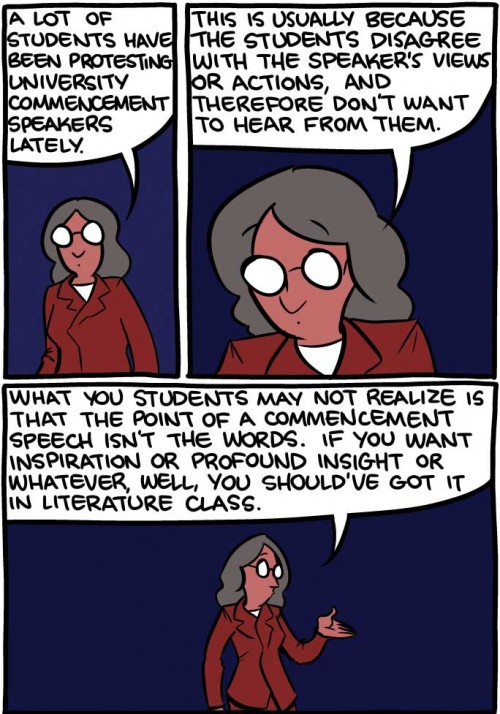 He then goes on to explain the reason behind these costly displays. I give you a choice. You can go read the rest of the comic, which is the easy way out. Or you can go read this paper by Joseph Henrich (pdf), titled “The evolution of costly displays, cooperation and religion: credibility enhancing displays and their implications for cultural evolution”, which will take rather more of your time, requires slogging through a little math and logic, but will enhance your credibility because of your investment in the subject.

The paper is also a little annoying because it will require looking at a university, or any other institution, through the same lens you would a religion. I made that sacrifice, though, so that you can see my opinion as justified and worthy by virtue of my effort.

Now I have to take my wife on a walk to the coffee shop…to help her “determine how much to commit to, or believe in, a particular representation”. I can tell that thinking this way is going to lead to a rather cynical transactional view of relationships.

Michael Nugent on death and atheism » « Cannibalistic humanoids from the deep