Oh, great. We had some remarkably cold weather earlier this month thanks to the break-up of the polar vortex, and now it’s predicted that it’s coming back.

…during the third and fourth weeks of January, some changes will take place. The high amplitude pattern is forecast to get more extreme. The polar vortex will move farther south and get stronger. The pattern will gradually change the current mixture of Pacific and Arctic air in the Canada Prairies and the North Central U.S. to all Arctic air. The air will get significantly colder over the Canada Prairies and the much of the eastern half of the nation as a result. 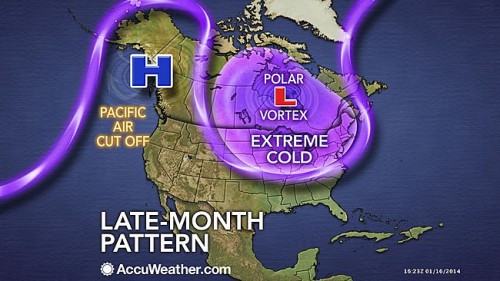 I live right under the first “E” in “EXTREME COLD”.

Cinematic Appraisals gets appraised » « I take it back. David Brooks belongs on the NY Times op-ed pages