I spent my first evening at the Paradigm Symposium last night. I’ve missed virtually all of the talks so far — I got to watch a panel about new media, podcasting and that sort of thing, and there wasn’t too much novelty to it, but it was fine…except for the bits where they mentioned how the skeptical outlook was distasteful.

There was also a final Q&A session of the evening where a few of us, me included, were put up front to introduce ourselves and take questions from the audience. I went bold and made it explicitly clear that I’m a skeptic, I don’t believe in little grey men or ghosts or the paranormal or any of that sort of thing, just so no one would be at all confused about my position. The responses of the other panelists were interesting: lots of mumbling about how we don’t know everything, and mysteries, and that sort of thing, and I got in one rejoinder about how science builds on what we know, not what we don’t know, and leaping into mysteries is a formula for failure.

It was an aggressive approach, but a good one, I think. At the bar session later a number of people collared me to argue, and several just wanted to know more. There’s a huge difference between this group and, for instance, the creationist events I’ve been to: paranormalists tend to be strongly anti-dogmatic, so so far I’ve only encountered one person who hit me with the “invite Jesus into your heart” line. They also tend to be curious, so they ask lots of questions, which is good. I think the main problem is a lack of criteria to judge the quality of evidence, so they tend to go lurching off indiscriminately into weird phenomena.

I met one nice fellow who was proudly showing off his cast of a Bigfoot print. 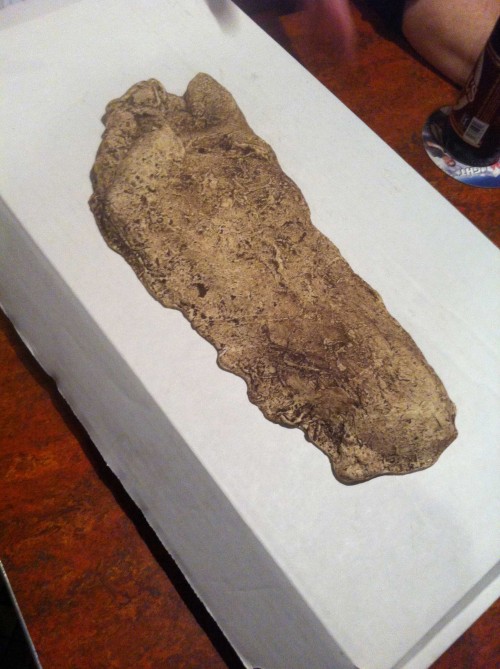 He was very friendly, and he’d carefully documented everything he could about it: who found it, when it was cast, all that sort of thing. Of course it’s totally useless as evidence for Bigfoot since prints are so easily faked, but that’ll be one of the subjects I talk about tomorrow: the quality of evidence and setting standards for your work.

Today I’m going to sit back and listen. I’ve browsed all their vendor tables, though: anyone need some healing crystals, or books about the Illuminati?