This language stuff is messy and complex. I was looking at this series of maps illustrating American pronunciation differences, and was starting to see a pattern in my own language — basically, if you look at the general rule for Washington state and Minnesota (which are often the same), that’s how I talk. With one exception:

I grew up spending many summers wading in the Green River collecting those crustaceans (and eating them), and we always called them crawdads, without question. “Crayfish” was a formal name, “crawfish” was unheard of. It’s green on this map. 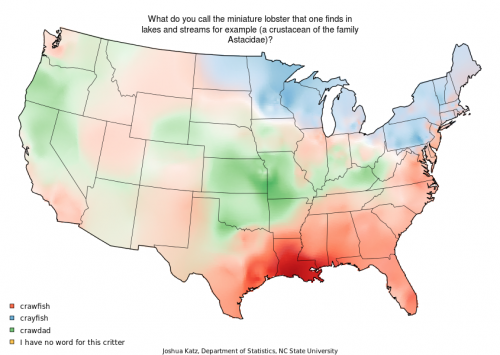 Then I realized…it was my father the fisherman who taught us about crawdads, and his family was apparently Appalachian Scots-Irish way, way back, who ended up in Iowa during the Civil War era, and eventually wandered into lives picking fruit and vegetables in the Spokane-Yakima axis…and those areas are all greenish on the map. Cool. There are these vestiges of my family history lurking right there on my tongue.

One weird thing about the article on this, though. It says,

Regional accents are a major part of what makes American English so interesting as a dialect.

American English doesn’t vary all that much — I can easily understand everyone all across the country. English in the United Kingdom, though — that’s where you get the strong regional accents.

Say hello to Nirmukta on FtB » « Dealing with the ten percent