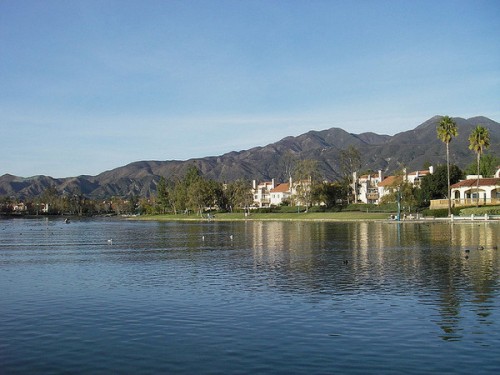 That’s what it looks like in Rancho Santa Margarita, Orange County, California. It’s a lovely suburb if you swing that way, I suppose. It’s fairly affluent. Median household income in 2007 was just over 95K, according to the usual completely unimpeachable sources, and the percentage of RSM residents living at or below the poverty line is less than 3%.

RSM is also described by the above-mentioned unimpeachable source as having had phenomenal growth in population during the 1990s. The city went from around 11,000 residents to more than 47,000. But the following decade was different. Between 2000 and 2010, RSM added fewer than 1,000 new residents to its Homeowners Association’s membership rolls. That’s not a situation anyone wants, as long as you define “anyone” as “developers.”

The problem is water. RSM is in southern Orange County. Southern Orange county doesn’t have enough groundwater for the people who already live there: there’s no way it can make those needed further 300% increases in its population without finding some.

And so the Santa Margarita Water District is very interested in whatever water they can find. And right now they think they’ve found some. 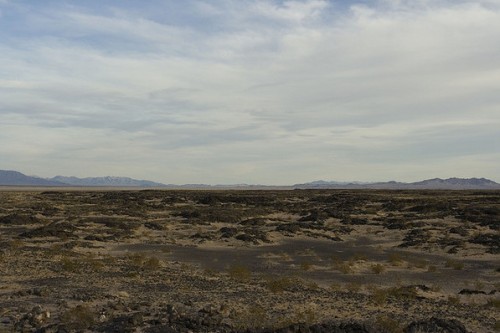 That’s a long-shot view of the Cadiz Basin in the middle of the California section of the Mojave Desert.  It’s right between the Mojave National Preserve and Joshua Tree National Park. It isn’t untouched wilderness: there are salt evaporating facilities hidden in the distance, and an agricultural venture growing some vines and some fruit trees using groundwater from the basin’s aquifer.

That agricultural venture, Cadiz Inc., wants to sell an amount of the basin’s groundwater to the Santa Margarita Water District, and to a few other water companies in Southern California. A large amount. As much as 50,000 acre-feet a year. It’s a lot of water.

Cadiz maintains that that much water can easily be taken sustainably from the aquifer, and from groundwater that would otherwise flow to the surface and evaporate, thereby being “wasted.” It also plans, eventually, to replenish the aquifer using water from the Colorado River, thus providing a way to store that river’s water in “wet years” for use in dry years.

A person with a bit of familiarity with the Western United States’ environmental history would likely look at this proposal and have the Owens Valley come to mind, or perhaps that movie where Jack Nicholson gets his nose lacerated by a child molester. And that wouldn’t be far off: it’s yet another example of the west’s cities treating their outback as resource colonies to be plundered. I wrote an admittedly severely biased and non-even-handed summary of the project here, and there’s some preliminary discussion of just exactly how stupid the project proponents’ hydrology claims are here. A glimpse of that last: Cadiz claims the two aquifers it would be tapping recharge at an average of 32,477 acre-feet per year, justifying their pumping plans to fill decorative lakes in RSM. (You didn’t think that lake in the picture up top was there when the developers moved in, did you?)

According to the independent hydrologists quoted in the second piece, that recharge figure is about the same as for aquifers on the east side of the Sierra Nevada, fed by that range’s snowmelt, in creeks that might well drown a person in spring.

There’s lots of other fun facts about this project too, like how Cadiz sidestepped federal review under the National Environmental Policy Act  by planning a pipeline along an existing railroad right of way, which it justifies by saying the railroad — essentially abandoned — could use the water to put out trestle fires. By escaping NEPA, Cadiz escapes having the USGS review its hydrology.

Or about how the whole plan depends on Southern California’s Metropolitan Water District allowing the use of its aqueduct to move the water. Cadiz and MWD just ended an almost decade-long court battle stemming from MWD’s spiking a previous iteration of the proposal, so you might expect some bad blood there.

However, several members of MWD’s board are appointed  by the Mayor of Los Angeles. The current mayor of Los Angeles is Antonio Villaraigosa. Antonio Villaraigosa is a former employee of, and current occasional traveling companion of, a British expatriate named Keith Brackpool, who somehow put his life back together after pleading guilty to securities fraud in the UK and leaving the country. He’s doing well enough to have fronted $25K to Villaraigosa’s inaugural ball. He’s also the CEO of Cadiz, Inc.

I could go on. In fact, I already have. The best way to find out more about the project is to check out water reporter Emily Green’s blog. There’s a few lawsuits pending to stop the project, and either the BLM or Dianne Feinstein might yet put the kibosh on the whole thing.

In July, former Rancho Santa Margarita mayor Garry Thompson said in support of Cadiz “You’ve all been out there, there’s nothing out there in that desert anyway.”

It’s funny. I feel the same way about most of Orange County. In truth, the project stands a good chance of drawing down groundwater levels across hundreds of square miles of mainly intact desert habitat by pumping Pleistocene water from the aquifer, depleting or drying up springs in the Mojave National Preserve and a few nearby wilderness areas, which would have a very bad impact on the local wildlife — including desert bighorn sheep. All for the sake of swelling the ranks of RSM’s homeowners’ associations.

The National Parks Conservation Association is one of the groups suing over the project’s likely effects on the Preserve. You can find out more about their involvement here. Consider slipping them a few bucks if this project appalls you.