1300 atheists unwinding after the Reason Rally and a long day of talks at the American Atheists National Convention leads to…costumes. Trekkies and a multitude of Jesi and Mohammeds. Loudness and alcohol. Raucus laughter and grand plans for world domination. Somehow I ended up in a strange hotel room late at night with a bottle of Jim Beam and a swarm of well-known godless folk you’d probably all recognize. 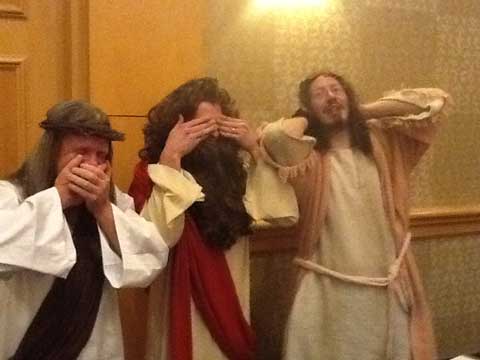 Regrettably, I had to extract myself from the scene and get some sleep, because today I must stand up in front of all those hung-over, weary atheists who are just now experiencing the symptoms of the creeping crud from standing in the rain for 12 hours, and talk coherently for a while. This is going to be a harsh day, I think.

And then…hurtling through the sky to Minneapolis! Long drive home! Frantic scramble to prep for tomorrow’s classes!

Hey, that’s me at the Reason Rally » « Why I am an atheist – anchor