There’s a study going around that’s getting a lot of press because of the palpably unjust conclusion that it says atheists are perceived as no better than rapists. I’ve read the paper, though, and I have to say that that’s a slightly misleading interpretation.

The paper is trying to specifically tease apart the causes of anti-atheist prejudice, and it does so with a series of tests. Their hypothesis is that there can be multiple reasons why someone could detest someone else, and they argue that, since religion is used as a test of whether someone is a member of the in-group, that religiosity is used as a proxy signal for trustworthiness.

In sum, according to the sociofunctional perspective, to understand prejudice against a given group, it is necessary to understand the threats that the group is perceived to pose. Independent theory and evidence indicates that under specific conditions, religious thinking promotes intragroup cooperation and trust, and that people use cues of religiosity as a signal for trustworthiness. Combined, these two perspectives suggest that distrust is central to anti-atheist prejudice, an insight that leads to a specific set of hypotheses regarding the nature of anti-atheist prejudice. Alternatively, another cause for hating atheists could be disgust or dislike — that their behavior inspires revulsion, or that atheists are simply unpleasant, unlikable individuals.

So let’s put it in context. This research did not establish a scale of personal attributes that ranked atheists, and found them comparable to rapists; it looked for causes, and used rapists as a category for comparison.

The kind of tests they did were surveys and examination of the likelihood of committing conjunction errors. The way they did this was to tell the subjects (who were all college students, by the way) a story like this:

Richard is 31 years old. On his way to work one day, he accidentally backed his car into a parked van. Because pedestrians were watching, he got out of his car. He pretended to write down his insurance information. He then tucked the blank note into the van’s window before getting back into his car and driving away. Later the same day, Richard found a wallet on the sidewalk. Nobody was looking, so he took all of the money out of the wallet. He then threw the wallet in a trash can.

The answer they found was that people made this error about 29 times more often if XXXX was “atheist” rather than one of the religious groups, and that the responses were not significantly different between “atheist” and “rapist”. There was also a correlation between the likelihood of making the error and how important the subject rated god in their lives. 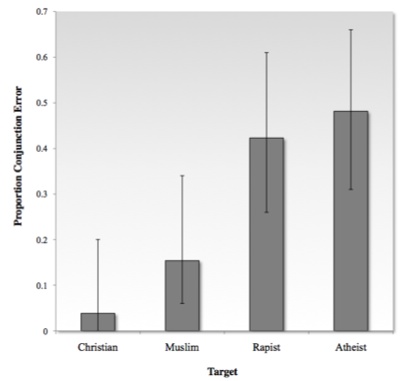 Don’t get hung up on the comparison with rapists. That was a category simply chosen because it would be unambiguously distrusted. They could have used “investment banker”, too, but then the comparison would be more difficult, because maybe a wealthy conservative college student wouldn’t consider that to be an untrustworthy occupation.

Richard is 31 years old. He has a rare inherited medical condition. This leads him to have dry, flaky skin and produce excess mucus. His skin often flakes off at embarrassing times, and he almost always has a dripping nose and phlegm in his throat. On his way to work one day, Richard was scratching his itchy shoulder. Some of the dry skin that flaked off caused him to sneeze, and some snot ended up on his tie. He failed to notice that the phlegm got on his tie. He wore this dirty tie through an entire work day.

Then they did another conjunction fallacy test, asking whether it was more probable that Richard was 1) a teacher, or a teacher and XXXX, where XXXX was Christian, Muslim, gay, or atheist. In this case, the result was that neither gays nor atheists were regarded as personally more unpleasant or unlikeable. 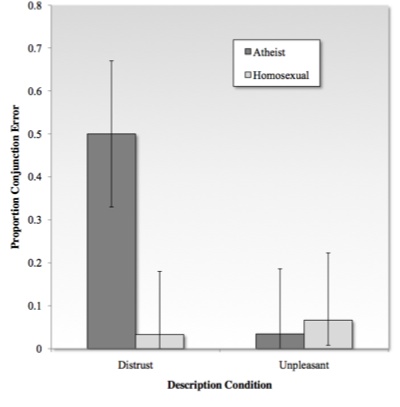 So the study has good news and bad news.

The bad news is that atheists really are not trusted by the public at large — we do not give off the positive in-group signals expected, so we get relegated to a kind of pariah status.

The good news, I guess, is the reasoning behind that. You’ll often see religious people rail against atheists and tell us how rude and awful and bad we are: take a look at the comments on this article on the study, for instance.

I think part of the issue is that some of the most visible, high-profile atheists we hear about (Dawkins, Hitchens) are vocally of the “THERE IS NO GOD AND IF YOU THINK THERE MIGHT BE YOU ARE AN IDIOT!1” variety. These are the atheists that get the press, so I can understand the source of the perception.

I’ve never met an atheist that wasn’t an ass. I’m not saying they all are. Just those I have known.
They push harder than the Phelps’.

Those people have misinterpreted the study (or more likely, haven’t even read it). It’s actually saying the opposite: people don’t perceive atheists as being unpleasant, they see them as being outsiders. It is specifically tying the prejudice to a judgment about trust, not whether we’re icky rude nasty people.

The message I take away from it is not to avoid the assertiveness associated with the New Atheist movement — although it may highlight those in-group/out-group boundaries, that’s necessary. We aren’t trying to say we are exactly like theists, we need to demarcate those boundaries as part of establishing our identity. What the study does do, though, is affirm that those campaigns to establish the idea that we can be good without god, that we have high moral standards, are even more important, because they go directly to the issue of whether atheists are trustworthy members of the community.