That Jesus guy sure got around. This is a sign in Shingo, Japan, where they claim that Jesus settled down after escaping crucifixion. 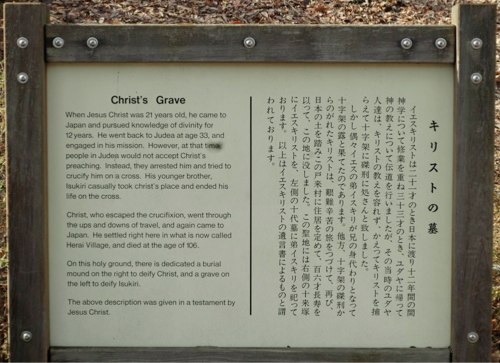 When Jesus Christ was 21 years old, he came to Japan and pursued knowledge of divinity for 12 years. He went back to Judea at age 33 and engaged in his mission. However, at that time, people in Judea would not accept Christ’s preaching. Instead, they arrested him and tried to crucify him on a cross. His younger brother, Isukiri casually took Christ’s place and ended his life on the cross.

Christ, who escaped the crucifixion, went through the ups and downs of travel, and again came to Japan. He settled right here in what is now called Herai Village, and died at the age of 106.

On this holy ground, there is dedicated a burial mound on the right to deify Christ, and a grave on the left to deify Isukiri.

The above description was given in a testament by Jesus Christ.

I like how Isukiri “casually” let himself be tortured to death.

I also wonder if the people of Shingo intentionally put up the sign to screw with Mormon missionary heads.