“Become the opposite sex and finally be at peace” 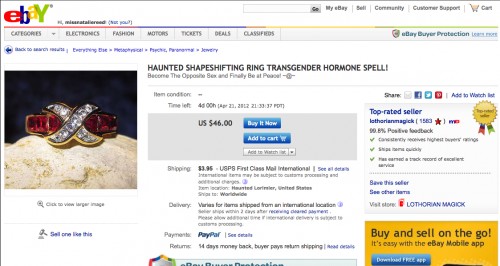 So I was poking around on e-bay looking for a little trans pride flag button to go with my Die Cis Scum jacket, now on the way in the mailsies (thanks Dallilama!) and happened to stumble across an enormous number of items being sold under the pretense of having the magic power to change their wearer (or caster?) into the “opposite sex”, or simply into a woman. And not just one or two little items. “Metaphysical” is one of the most densely populated categories for the search term “transgender”.

What spooks me perhaps the most is how many of these sellers have highly positive feedback ratings. What breaks my heart the most are little comments like “Great product! Can’t wait to see the results!”

Poking around, it seems the item descriptions are very, very carefully worded. They imply the magical ability to turn you physically into your identified sex but nonetheless can be interpreted to have only explicitly offered “guidance” or confidence or whatever on the journey through transition.

This fits in with one of the common ways that magic will be justified as having worked. That it uses what’s available in the world. So, if you buy this product, it obviously does nothing whatsoever, but the experience somehow pushes you a little further along in your process of accepting the need to transition, and you eventually DO actually transition (through sciencey things that actually DO stuff, like dissolving candy-tasting estradiol tablets under your tongue), the magic can ultimately be said to have “worked” but simply through “mysterious means”. Or the seller can simply say the item just “magically” gave you a greater sense of clarity in your gender identification, or helped in the process of your “female spirit” gaining the strength to someday be embodied.

Or hell, if they were really, really awful (and stooping to such vile depths as to actually sell such a product, and make a regular business of doing so, kind of already establishes that), they could claim it DID work. Just rather than turning from you a man into a woman what it did was turned you from a woman into a man and altered the world so strongly to accommodate this change that it also gave you the memories of having always been a man. Ta-da!

The ring I mentioned above doesn’t even bother with these rhetorical loopholes, though (other than the usual “you must genuinely believe” get-out-of-jail-free card). This is what’s in the item description:

This magickal item is cast with an amazing Transgender Hormone Spell. This spell is extremely potent and only for those who want to make serious changes physically and mentally! If you feel like you are trapped within your own body, as if you were meant to be born the opposite sex, this spell can help you become the man or woman you always felt like you should be. This spell works equally as well for both sexes. If you are a man wanting to become a woman; the powers of this spell will give you a higher production of Estrogen in your body — your voice will become softer and you will lose facial hair. You will began to grow breasts and your male anatomy will get smaller, eventually forming a full female vagina. For women, your Testosterone will increase — your voice will become deeper, you will grow hair on your face and on your chest. Your breasts disappear and your vagina will grow into a penis. You will have full sexual ability and your partners will never be able to tell that you were once a different gender. Most importantly, this spell will give you self-confidence and self-esteem. You will become happy with yourself and feel comfortable within your own skin. Please understand this is a process, you cannot simply put the ring on and change your entire gender. This spell is extremely powerful and to be handled with care and caution.

(ummm… estrogen doesn’t raise a deepened voice, affect facial hair, or turn penises into vaginas, nor does testosterone make breasts disappear or cause vaginas to grow into penises- though a degree of clitoral growth is common)

But you know what’s really creepy? The number of items suggests this is a common, successful and profitable practice.

I don’t think I really need to go too much into how absolutely vile and disgustingly exploitative this kind of thing is. To deliberately target a group who are extremely vulnerable, going through intense suffering, terrified of the risks and shame and stigma associated with the only established options, possibly intensely hating themselves for having these feelings in the first place, and feeling utterly completely hopeless and desperate for any answer, and then seek to profit from the degree to which that vulnerability, pain, fear and desperation compromises their ability to think critically about the con you’re offering them?! The level of avarice and casual willingness to exploit some of the absolute worst suffering a human being can endure (and often fail to endure), often thereby deepening and perpetuating that suffering, either miring them in false hopes or slapping them across the face with a reminder of the impossibility of any of the answers they want, and taking their money in the process, is absolutely sociopathic. You could do better to simply mug someone. At least then you’re not twisting the knife in their deepest wound.

We pride ourselves in being Honest Sellers that you can Trust! If you ever have any questions or concerns, please send me a message right away! We promise to work with you to resolve any issues you may have until you are completely satisfied. Customer service is my number one priority! I truly care about ever single one of my clients. Upon the purchase of any one of my items, you will not only receive a great treasure with true powers and energies, but you will also gain a friend who will be happy to help you with any of your concerns to the best of my abilities.

But who would actually believe this kind of tripe? Who would allow themselves to be so exploited? We all know that our world doesn’t work like Ranma 1/2, Whateley , Switch, Zerophilia or Misfile. So how could someone allow themselves to believe in such a possibility to the extent that they’d hand over $46.00 (or, as in some of the listed spells, $99.00) without realizing it’s an obvious con?

Well, we all could.

Skeptics have a bit of a bad habit of viewing gullibility as an innate characteristic, typically viewing people as being in varying degrees either skeptics or suckers, with people towards one end of the spectrum easier to fool than people towards the other end. But that’s REALLY not how it works. Rather gullibility, and related things like taking a given concept on faith, intuition or “common sense”, willingness to accept a presented idea uncritically, or reluctance to question an existing belief, are all contextual matters, directly relative to the degree to which someone either wants or needs that belief. Rather than certain people being simply more critical thinkers than others, all human beings will hold or reject beliefs on the basis of the psychological (or socioloogical) rewards of maintaining it and the psychological or sociological costs of abandoning it.

Even the most critical, skeptical, cynical, untrusting of people will become eager to accept an idea when she’s desperate enough for it to be true. This is why it becomes especially dangerous when cults or religions (not that I see much difference between them other than degree of cultural approval) target for conversion people who are in particularly emotionally vulnerable states, and why these organizations know this is a winning strategy, and have a marked preference for such targets. But it’s not always an either / or scenario. It occurs in degrees.

Nonetheless, a situation like gender dysphoria presents on the very extreme end of this spectrum. Contextually speaking, it is the perfect vulnerability, and mocking or deriding someone as “gullible” or “stupid” for buying into something that would be heartbreaking to reject is extremely callous, arrogant, and ignorant of the ways that belief operates in all of us. Truthfully speaking, I did make wishes- on stars and birthday cakes and 11:11 and every other possible context, as did I pray, for exactly the easy answer to my desires that these cons offer. I honestly can’t say that if my 15 year-old self had had an ebay account and a little disposable money that “he” wouldn’t have bid on one of these.

Understanding the process of belief, how and why human beings arrive at belief, should be one of the principal areas of inquiry for any movement calling itself Skepticism. But sadly we ourselves are exactly as quick to base our beliefs upon what is preferable or more psychologically and socially rewarding to believe: that we are inherently less susceptible to such deceptions, regardless of context, and implicitly more clever and rational than their victims. If we have any genuine claim to the term “skeptic” and our rickety sense of superiority, we should be able to abandon this self-congratulatory belief and recognize that under the right conditions, we’re also susceptible to the simple human processes of finding our comforts where we can, and abandoning critical inquiry when it becomes synonymous with heartbreak and hopelessness… or alienation and loss.

It’s easy to laugh at those who are victimized by those who do understand how human belief operates, and how “gullibility” is contextual and exasperated by vulnerability, fear and need. It’s easy to position ourselves as above their “bad decisions”. But calling oneself a skeptic should be explicitly dependent on not simply engaging in the easy analysis of a situation. Not allowing the privilege of being welcomed easily into the medical establishment to point and laugh at a victim of pumping and ask “why would they do that? Why not just see a real doctor?”. Nor allowing the privilege of never having experienced a burning, pressing, consuming, inescapable desire, passion and need that seemed literally impossible, only realizable through magic, to allow us to consider ourselves smarter than those who would be taken in by the promise that magic is literally real and can indeed answer that desire, passion and need.

That’s kind of what privilege does. Makes you fail to consider context, and take the way a given issue operates for you and use it to project simplistic, biased prescriptions and condemnations onto those whose circumstances cause the issue to operate differently.

It’s not a very good example of critical thinking. In fact it’s quite the opposite. But I understand, and I know that’s hard to accept. Accepting that your ability to avoid being exploited like this is at least as much about good fortune as perceptiveness, accepting that under the right circumstances you could be just as easily exploited, and accepting there’s nothing about you inherently more skeptical or rational than anyone else, exacts high psychological costs, and ignoring it presents nice psychological rewards. The simplified world of skeptics and suckers offers us what we need to believe. We buy the ring. What’s $46.00?