College was an amazing time for me.  I packed up and moved- for the first time- away from home.  We didn’t have GPS back in those days, but according to the AAA Map I didn’t have to use to find my way to campus, I was 1.3 miles from home.  If I went to the highest point of campus, I could see the steeple of the church across the street from my house.  From most of the campus I could see the “Happy Jesus” atop the church that adorned my parish. 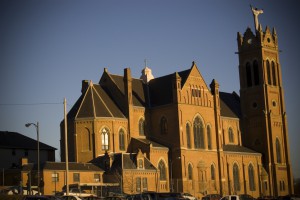 I reveled in being Catholic at a devoutly Catholic place.  Duquesne University of the Holy Spirit- the college game announcers tend to leave out the full title of the place- was a thrill for me.  I was elected to Student Government, I was active and served a few times as an officer of the Black Student Union, and I especially took pride in the fact that I spent much time with the Campus Ministry group.  (A few of my friends from that association are now also atheists, but I don’t “out” private citizens, so no hints here!)

I studied and played and had the typical “college experience” that led to me staying up too late philosophizing and pondering life’s questions while listening to Erykah Badu.  I joined the International Student Organization just because I had never met people from many of the countries represented at my school, and I wanted to learn more and meet more people who could tell me what things were.  Books be damned!

It was during my sophomore year that I was looking for a job.  I wandered into what I believed to be the student radio station and asked to talk with the person who could hire me.  Being a native, I sailed through the part of the “Pennsylvania Pronunciation”interview.  car-NAY-ghee and mah-NANG-a-HAY-la rolled off my Yinzer tongue just as did the weirdly named university I attended.  (doo-CAIN)  Having never taken a journalism course, two years into my Political Science and Communications studies, I screwed up and got a job at the wrong place.  There was a reason that grad student looked so… experienced!  I turned down the wrong corridor and went into the REAL radio station!  I was hired as a news assistant at 90.5 WDUQ-FM.  ($3.35/hour  I was rollin’ in it, y’all!) And I spent four years learning the ropes.

Thanks to my training at the hands of an old-school journalism instructor, I learned by doing.  I had to get out of the office and go get a story.  There weren’t no fancy “Internet” back in those days!  You had to get your hands inky reading these big grey pages called “newspapers.”  And if you wanted to talk with someone, you had to dial their number and get them on the line.  I couldn’t just send out emails and wait!  Sometimes, you had to get yourself to an office or even a house to find the person you’d speak with.  It was truly a different era!

But I learned well enough that when I heard there was an entry-level NPR gig opening up, I was able to get it.  I spent a decade at National Public Radio.  I got to meet people who I’d only ever heard their names mentioned in the credits of the shows I listened to.  I got to work with people I’d idolized from afar.  I also got to spend a lot of time learning to pitch stories and getting over the stung ego of being told, “Nah.  That’s not interesting.”  I was both an editor and a producer.  On occasion, I also got the opportunity to report.

I worked on Morning Edition. (Bob Edwards is a darling, and listening to him interview is a master class in the craft!) I spent years at Tell Me More with Michel Martin.  (A travesty that she doesn’t have that show any longer!) And I got to work on most of the other programs as well.  I’m a good producer.  However, it became apparent that producing wasn’t where my heart beat most strongly, and I went off to other things.

Namely, I started writing and speaking more extensively about the harm that can be brought by over-religion and why more must be done to bolster the wall between State and Church.  I was given the opportunity to speak at atheist events- something I rather LOVE doing- and I spent much time writing and researching a book that I am embarrassed to admit is still not written!

“All In with Chris Hayes” Appearence » « A Bit About Me: The Early Years