I’m often asked to give a bio about 100 words long.  More often than that, it’s condensed to “Journalist and speaker, Jamila Bey is delivering X talk on Y date.”  And while I do enjoy trying to be witty, pithy and accurate within those constraints, I think a more proper introduction is in order for this site!

First, let’s begin with a game of “Spot the Lie!”

A) I was born a poor Black child.

B) When I was 17, I did what people told me; did what my father said and let my mother mold me.

C) I started from the bottom, now I’m here.

F) None of the Above

If you guessed “A” give yourself and Mulligan and try again.  “F” is what we’re looking for! 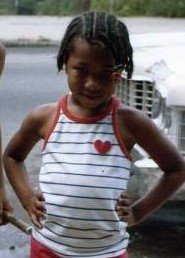 I was born, raised, educated and held my first job in Pittsburgh.  I’m the child of a telephone operator and an auto worker/librarian/turned police sergeant.  The historic part of the city in which I grew up, the Hill District, is the setting for all of Pulitzer Prize-winning playwright, August Wilson’s plays.  Religion played a big role in my young life.  While he didn’t practice, and I certainly never learned the doctrine, my father was a Black Muslim by birth.  Having the name “Bey” in Pittsburgh meant that I was always asked if my people were from the West part of the city (they were) and if I ate pork (I didn’t) and how come I went to Catholic school if I was part of the city’s most well-known, non-Christian clan. 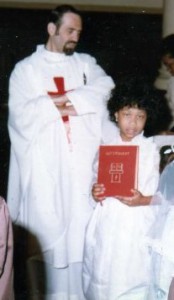 My mother was a Baptist who converted to Catholicism about the time it came to enroll me in school and to get a parish discount.  I do believe her devotion, but the timing leads me to think that her god’s got wonderful timing.  Except for a 6-8th grade reprieve, ALL of my education up until my final semester in college was at the hands of Catholic schoolteachers. And true to form, they taught me how to question and dissect everything.

I actually did consider myself to be an adherent Catholic… though it never did make sense to me.  I put forth a good face.

The face started to crack in high school when my questioning Catholic doctrine and dogma and my growing understanding of my rights as a citizen were in eternal conflict.  I once spent an afternoon in detention where the vice principal, a round ball of Catholic rage, took sharpie to my backpack and demanded I help her.

I’d taken White-Out and painted a wire hanger with a circle and slash through it, and the block letters, “PRO CHOICE” on my bag.  As she scribbled and scribbled in black over that White Out, the marker just slid off, and darkened the area around my “blasphemous” artwork, serving to highlight it instead.  I got another day of detention because as we were “covering up” my bag, I was told, “You can’t come back to school with this on your bag! You can’t wear this uniform and have THAT showing!”  I smirked at her and laughed, “I guess everyone is gonna put this on their backpacks and get free “out of uniform days ” from you for now on.” 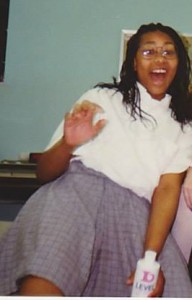 I spent more time in detention than in nearly every other activity except for forensics.  I loved parliamentary debate just as much as I loved being in front of a room.  Thanks to my success in the activity, I got to travel and meet lots of folks- many of whom I still count as friends today!  And while I have no recollection that we met as high schoolers, Harvard Humanist Chaplain, Greg Epstein and I were at the same National Catholic Forensic League tournament in Boca Raton, FL!

All that debating and hanging out with cool Jewish kids was having its way with me.  I refused to pick a female saint for my Catholic confirmation ceremony on principle.  I refused to talk about anything other than how amazing was Sinead O’Connor for ripping up the picture of the pope on SNL- a spectacle I actually witnessed live.  And I was really having a hard time buying that there was some benevolent and loving man in the sky who saw fit to spend plenty of time reminding me that lusting in my heart was sinful, but didn’t see fit to spare any time to stop the suffering of a girl I knew who wound up miscarrying her own father’s child.

For one not so adept at math, this Catholic stuff didn’t add up for me at all!

So, I decided to enroll in a Catholic university and go in whole hog!  Eating none of course, I’m 1/2 Muslim after all!

Saved By No Hell: The College (and beyond!) Years » « ​HAPPY BLACK HISTORY MONTH!