Most people will recognise the above reference. It’s to the infamous Omnipotence Paradox; can God (or other allegedly omnipotent being, if you prefer; when my father introduced me to it as a child, it was by way of Mr Impossible from the Mr Men books) make a stone so heavy that he can’t lift it? Various answers have been put forward to this over the years; one of them, several years ago, came from my daughter.

We were at dinner. I can’t remember at all how old my daughter was, except that it was some years back and she’s now twelve. Maybe seven? Maybe not. I forget how this came up, but my husband decided to ask the children the version of the paradox that comes up in Babylon 5: can God make a puzzle so difficult that he can’t solve it? (The character in the show includes that it’s ‘us’; humans and, given the show’s context, assumedly intelligent aliens as well.)

“Well,” Katie suggested, “he could make the puzzle so that it changes him so that then he can’t solve it.”

My husband and I exchanged the sort of look you exchange when your primary-school-aged child has just solved a centuries-old philosophical puzzle. (On the unlikely off-chance that you have not personally had occasion to encounter that look, it’s basically “Did that just happen?”) He asked her the more traditional version of the puzzle, and, of course, she figured out how her answer would fit; God designs a rock that has the property of causing him to lose the ability to lift the rock. I don’t want to brag, but my daughter is pretty darned smart.

My nine-year-old daughter* and I, both atheists, are teaming up to review children’s apologetics book Cold Case Christianity For Kids, by J. Warner Wallace. The introduction to the series is here; posts in the series are being linked up there as I go along.

*She is in fact now 10. She was 9 when we sat down to review this chapter. One of these days I’ll catch up with myself, although I hope I manage it before she turns 11.

When we left our intrepid cadets, they had just been writing a list of possible explanations for the resurrection story. For those who don’t recognise it, Wallace is here using a line of argument used fairly commonly among apologists, which goes like this:

By the way, for anyone interested in an discussion and takedown of the points normally covered in this line of argument I would recommend Richard Carrier’s extremely detailed and comprehensive essay Why I Don’t Buy The Resurrection Story, which goes through the arguments in vastly more detail than I’m going to be able to manage here. Anyway, my last post covered the part that dealt with stage 1 – writing the list of explanations – and the chapter was now moving on to stage 2 of the argument.

I asked Katie what she thought. (As I said before, I wish I’d done that before reading her the list of suggested explanations the book gives; it would have been interesting to hear what a child of this age who wasn’t a fictional mouthpiece for Christian apologetics might come up with of her own accord. As it was, I asked what she thought of the list.)

“I think the possibilities are,” Katie told me, “1. that they imagined him alive – but, since he apparently touched them, that doesn’t make sense unless they were all crazy people on drugs or something. So, I think the most likely thing is that he just fainted. I mean, why do you die on the cross anyway? Do you just die from having nails through your hands?”

I briefly explained the causes. “So… blood loss and lack of oxygen. Wouldn’t that cause someone to faint?” Katie mused. “And when you faint, you look a bit dead and a bit asleep.”

Which, I suppose, does at least answer my longstanding inner question of ‘Swoon Theory? Who the hell believes in Swoon Theory anyway these days?’, which is what I always think when I read these arguments. My nine-year-old daughter under the influence of a Christian apologetics book that was meant to have the reverse effect on her, that’s who. (Seriously, though… could I just point out that every time I remember ever reading this argument, the List Of Possible Explanations has included, and nearly always started with, Swoon Theory – and yet, in years and years of checking every counter-apologetics work I could find in any of the major or minor libraries I frequented during this time, which included a lot of libraries, I can’t remember ever seeing a single counter-apologist actually put this forward as an explanation. So, strawman much?)

Anyway, back to the story, which is now in the second stage of the argument; offering refutations for all the non-‘rose-from-dead’ explanations. Daniel votes against Swoon Theory. For purposes of narrative convenience, he apparently knows the facts that Wallace needs someone to put forward in order to refute this one; he tells the others that crucifixion was a ‘long, terrible way to die’ and that Roman soldiers were experts in checking that their victims were really dead, so he sees no chance that Jesus could have survived this process and done so undetected. (The narrative does not go into how a nineish-year-old happened to know so much about crucifixion).

Katie was unswayed by this argument. “Uh-uh,” she told me firmly. “You know about this stuff. Do you think there’s any chance he could live?”

Despite not actually being a proponent of Swoon Theory myself (personally, I go for Hallucination with a heavy coating of Legend, but that’s a post for another day), I had to answer ‘Yes’ to this one. Fluke survivals of significant trauma happen (especially when you consider that Jesus’s crucifixion seems to have been considerably shorter than the usual). And, while I’ve no doubt the Roman soldiers were good by the standards of their time at checking for signs of life, that’s still relative; ‘the standards of their time’ would have been less rigorous than the standards now. Undetected survival of a crucifixion would have been massively rare, but… any chance? I had to say yes.

“So there you go,” Katie agreed. “There’s a chance he could live. A doctor says that, and you’re very wise.” (Can I just add: Hooray! After all these years, finally one of my children thinks I’m actually wise!)

“And besides,” Katie mused, her thoughts off and running, “these people think he’s magical, so couldn’t we stretch the truth a tiny bit? And the Roman soldiers – maybe there are a group of them who feel bad for this guy, and they’re the ones who check whether he’s really dead. And they say “OK, let’s set him free” because they don’t want him to die. And maybe they’re the ones who open up his tomb.”

I was proud of her for thinking of possible explanations, but an apologist could probably pick half-a-dozen holes in that one, and I didn’t want to leave her with conclusions formed on shaky arguments. “Hang on. That explanation sounds like it’s getting complicated…”

“Still,” Katie declared, homing in on the main weakness of this particular line of apologetic argument more accurately at nine than I’d previously managed at twice that age, “we’re not looking for the simplest explanation. We’re looking for the most likely to be correct. So that one,” she waved vaguely at my computer to indicate the ‘Jesus rose from the dead’ explanation, “is the most simple… do you think it’s the most likely? Have you ever seen someone die and then been like oh, hey, how’re you doing?” She spread her hands in invitation of a non-existent refutation. “I don’t think so. And since you’re a doctor and you know about this stuff, then… cross that one off the list, ‘cos it’s impossible!”

And that, of course, is the biggest flaw of this particular line of apologetic argument. No matter how much apologists might argue that miracles/the supernatural are theoretically possible, the fact remains that, in practice, they have a probability effectively indistinguishable from zero. Over and over and over again, claims of miracles have been investigated and found not to stand up to investigation, Even where problems with the other explanations that we can think of make them unlikely, that isn’t going to make ‘It was a miracle’ the likeliest option.

In the previous chapter, Wallace/Jeffries tried to pre-emptively circumvent this problem by arguing that a God who could create the universe could also do miracles, and therefore we shouldn’t rule that possibility out. The problem with that, though, is that there is a vast chasm between “It is theoretically not impossible that this could have been done by a divine being” and “The likelihood of this having being done by a divine being is high enough that we should consider that as the default explanation if others are ruled out”. We can’t theoretically rule out miracles, in the same way as we can’t theoretically rule out alien visitations or fairy magic; but, in practice, they don’t stand up as a default explanation for the unexplained. If that wasn’t the case, after all, Wallace’s own job as a cold-case detective wouldn’t exist; in any case where other obvious explanations for a murder were ruled out, this same logic would lead us to the conclusion that the victim had actually been miraculously smote dead by God.

As one of my commenters aptly put it a few posts back: ‘Kaas’ Law: “When you have eliminated the impossible, what remains may be more improbable than that you made an error in one of your impossibility proofs.”’

Sorry – I meant to post the obvious needed follow-up to my last post on the same day, but held off to check I had the middle name spelling correct and then completely forgot to hit ‘Post’.

My sister gave birth to my third nephew, Abraham Wolf Levine, on the 17th of December. Mother, child, father, and both older brothers doing well. Hello and welcome, Abe! My sister and her family were thrilled to have one more for the Christmas celebrations this year.

Just had a call. My third nephew is shortly to arrive slightly sooner than anticipated (36 weeks 4 days). My sister lives in the USA so I can’t be there, but so excited and just waiting to hear more. Ruth, we’re thinking of you and glued to the phones.

Husband to eleven-year-old son: ‘Do you know what a meme is?’

Son: ‘It’s when the Internet won’t shut up about something.’

I know you’re famous for your toast pictures. But, in my (entirely unbiased) opinion, my daughter’s Evil Pancake Face totally knocks them into a cocked hat. 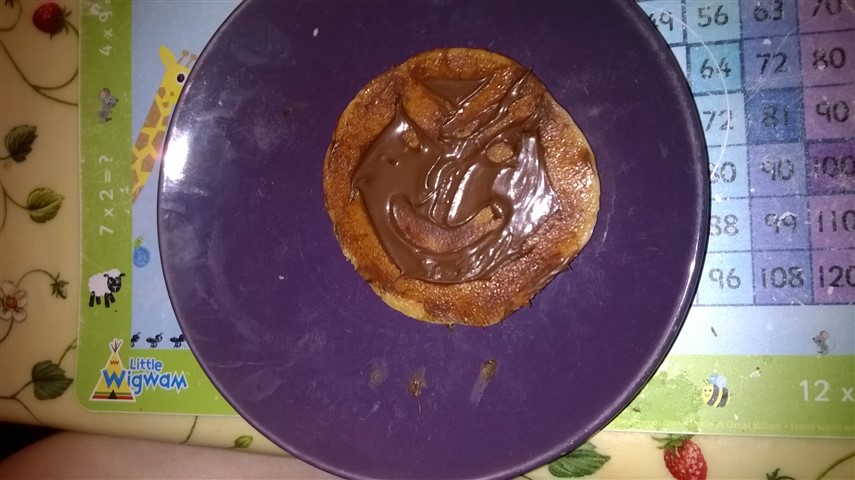