M. A. Melby was–possibly still is?–a regular commentator here at FtB, but also a contributor at Trans Advocate and a storify curator of online harassment and/or online stupidity. While I personally haven’t seen her in the comments section as of late, I do wonder if she still reads this. In the event she does encounter my blag: Hi! I appreciate your work from the bottom of my soul, and I hope you’re doing well.

Y’all should check her work out if you’re curious to see how bad the anti-trans harassment can get.

Brian Jean, leader of my favourite provincial political party, the Wildrose, has a shocking moment of candor:

I’ve encountered a few interesting conversations on some trans groups with a predominantly trans masculine membership. A few of these conversations blew up about toxic masculinity and “passing.” As these groups probably wouldn’t appreciate direct links to their private chats, I’m just going to try and represent the conversation with my own words.

To begin, a few disclaimers:

I put “passing” in quotation marks because it’s a really problematic concept. It works something like this:

Passing is the act of a trans person going about their life without anybody knowing they’re trans until/if they disclose.

The assumption that all trans people want to look cis can come from a few different angles. Maybe someone believes that looking trans is bad–and they’d be right, but only because of the discrimination cis folk feel entitled to enact on trans folk, not because gender variance is inherently wrong or gender norms are inherently right. Maybe someone believes that all trans people want to “look cis,” which isn’t always true. Thirdly, there is almost always the assumption that men and women “look” a certain way, which informs the whole “looking cis” business.

Of course, men and women don’t have just one look, and when people feel the need to police or “correct” trans folk’s gender expressions, what they typically have in mind is conventional masculinity or femininity. That even cis people occasionally choose to deviate from gender norms is lost on them. “Looking cis” is never defined except in nebulous terms relying on other people’s judgement.

People will make a guess about a person’s gender based on more than just their appearance. There is also the matter of their behaviour and body language.

END_OF_DOCUMENT_TOKEN_TO_BE_REPLACED

It’s the actual Pride Parade today, although in my city “Pride” is about a week and a half long and includes all kinds of Queer events, not just the parade.

I do one of these each year, although this is the first time I’ve had a platform like FtB to do it on.

So, discrimination is bad, right? Most people will pay lip service to that idea. Discrimination bad. *nods along*

If you live in Canada, you’ve probably heard of Bill C-16, which in recent memory is the government’s second attempt to explicitly protect trans rights at the federal level (thereby obligating the provinces to follow suit). That means discrimination’s over!!

…Except, not really. First of all, the Bill hasn’t passed yet. The Senate is still stacked with Conservatives, including Don Plett, who was responsible for killing the last Bill. Even if it passes in Parliament, it still has to go through them before it goes to the Queen for Royal Assent.

Second, those pesky levels of discrimination come into play anytime a minority’s rights become enshrined in law. Institutional discrimination, where minority rights are either omitted, unaddressed, or actively antagonized, is what ends when a government declares that this is unacceptable and follows through with changes in its own policy.

And if everyone subscribed to their various institutions flawlessly and without question, that would be the end of discrimination. However, there’s still structural discrimination (where minorities receive unintentional fallout as a result of a law that never had them in mind) and also personal discrimination.

Thirdly, just because something is illegal, doesn’t mean it never happens.

Unfortunately, there are many sectors of life where opportunities for personal discrimination can occur. An employer can still secretly dismiss a candidate for being trans, as long as they pay lip service to something about merit. A landlord can still evict a tenant for being trans, as long as they find some slight to exaggerate as a violation of the tenancy agreement. A teen can still lose their home if their parents decide to kick them out. People legitimately feel justified in murdering trans women in what would otherwise be recognized as barbaric “honour killing.” That murder has always been a crime and, with Bill C-16, a hate crime, is small consolation to my deceased sisters and brothers.

So, how much of this or this goes away because of Bill C-16?

Sixty-three percent (63%) of our participants experienced serious acts of discrimination—events that would have a major impact on a person’s quality of life and ability to sustain themselves financially or emotionally. Participants reported that they had faced:

“Despite being very well educated, we found that trans people have a median income of $15,000* a year,” she said.

You know which ones I’ve endured? School bullying, loss of job and sexual assault. I couldn’t get the latter prosecuted as a regular crime, never mind a hate crime, so Bill C-16 offers me no vindication on that front. As for the loss of job, it’s laughably easy for an employer to exaggerate the faults of an employee and fire them under the pretense of performance. Or not hire them in the first place for the same reason.

Change isn’t going to occur until people start changing their minds about the trans community, until they understand the needs unique to our lived experiences, until they understand the poison that informs so much of our discrimination on a personal level. People need to acknowledge and yes–check–their privilege, because without doing so explicitly they will find their opinions to be subconsciously informed by prejudice. Some of these people will have institutional power over me. Some of them will know to pay lip service to the areas (skill, merit) where it’s legal to discriminate. Those people will not have their mind changed by Bill C-16 alone.

So, this year? I need Pride because the people opposing Bill C-16 are trying to paint me as a predator despite the fact that I’m several orders of magnitude more likely to be a victim at cis hands than their cis, gender conforming girls. I need Pride because there are wiseguys picking up on the cues offered up by the likes of Governor McCrory and bringing that bullshit here. I need Pride because trans activists are being assassinated, whose murderers are treated to judicial slaps on the wrist, whose deaths broadcast a message: “you are more expendable than a man’s so-called honour.”

Most of all, I need Pride because there are a lot of people, including ones in Pride, who don’t seem to give a shit about these problems. The cis gays might be ready to just throw a massive week-long party, but I’ve still got swords to sharpen and battles to fight. I can celebrate that Bill C-16 has been introduced while also acknowledging that it has a long way to go before becoming law, and even if it passes, that informal social change is still necessary for integrating trans people into broader society. 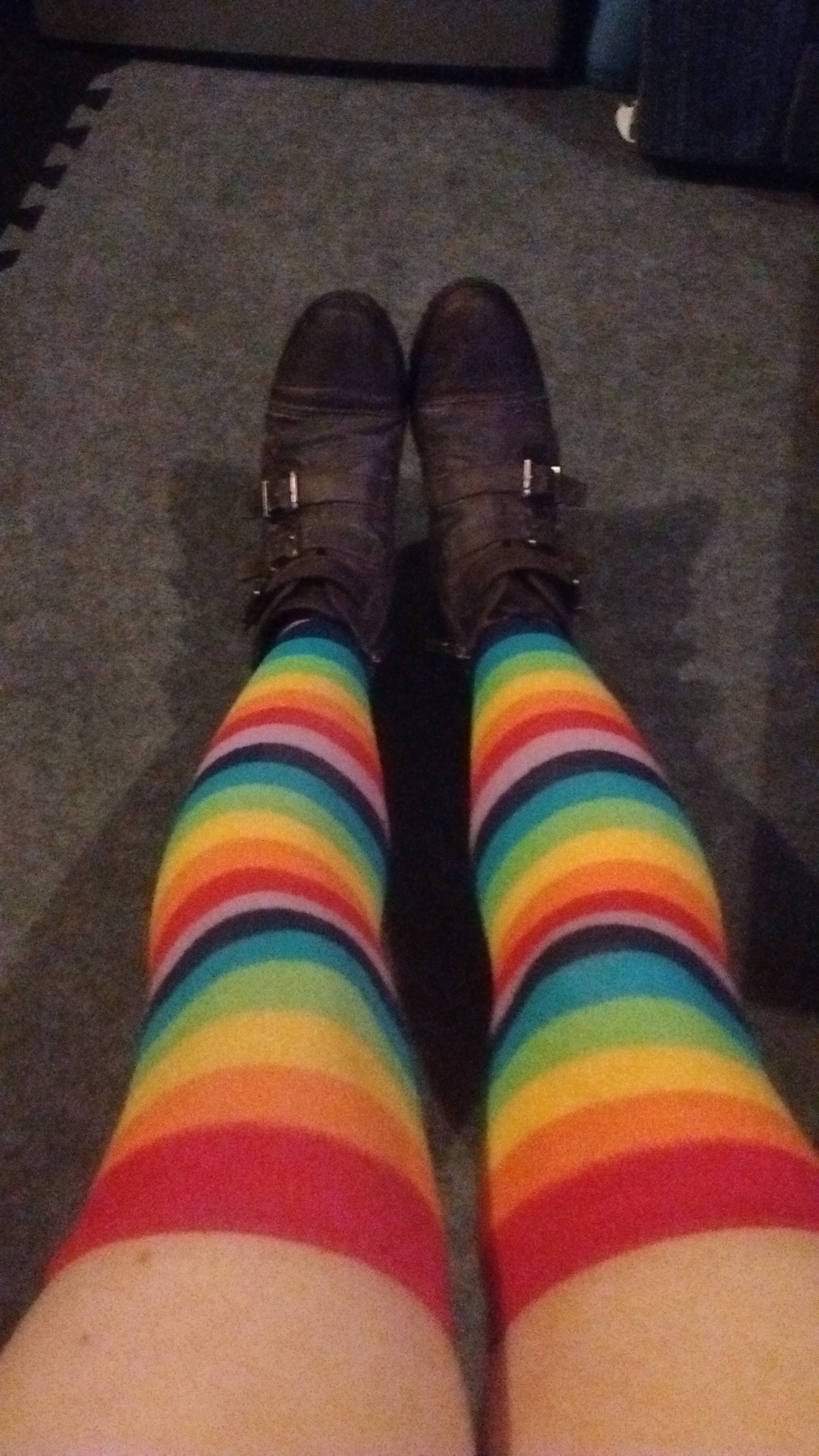 That’s why me and my conditioned booties need Pride this year. 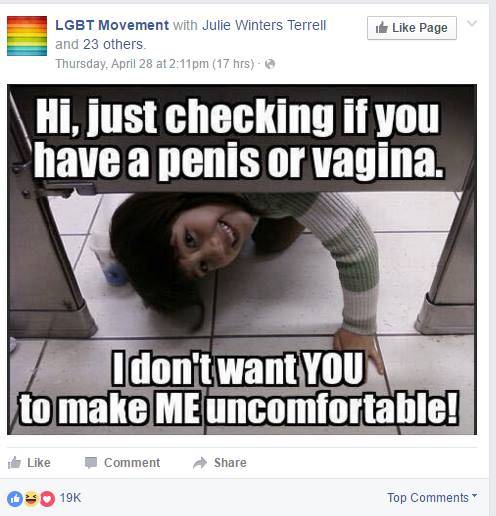 In lieu of the non-existent counseling resources provided by the province and in lieu of private practice I presently cannot afford, I decided to attend a women’s group for DV survivors. There were some pretty horrifying stories and I identified a few features in these abusers that they had in common with each other–and my ex. So I guess I got something out of it.

The materials I’ve been accessing appear to be mostly right when put to the test. Abusive ideations might have a diversity of origins but their actual behaviour is fairly predictable, with a fairly small amount of variation. When it was my turn to speak, practically half the group said “wow, she’s a narcissist,” and I hadn’t actually mentioned my amateur hypothesis, so that was affirming. The facilitator also gently chided me for playing down my abuse, because I said I was grateful she hadn’t hit me (a white lie–I didn’t want to explain I was kinky to people who are still recovering from battery; nonetheless, the physical bruises were consensual). That was a necessary call out and I’m glad she did it.

But there were a few problems.

END_OF_DOCUMENT_TOKEN_TO_BE_REPLACED

There are no words.

Today I’m recommending a podcast about trans issues from two FTM perspectives. They cover a lot of similar material that I do. If listening to podcasts works better for you than reading blags, I definitely recommend this resource if you want to learn about more trans stuff!

You can find them on Soundcloud or also the Youtube link below:

Episode one covers the term “cisgender,” cis privilege, and also the problems with the bathroom bill selfie protests.

[Edit: I’ve been told this was satire. Consider me duped.]

Stephen Hawking was, for whatever reason, queried on his opinion of Donald Trump, which he gave thusly:

Speaking to a television interviewer in London, Hawking called Trump “a demagogue who seems to appeal to the lowest common denominator,” a statement that many Trump supporters believed was intentionally designed to confuse them.

I don’t know about intentionally, but conservative mentalities do seem to be prone to… well, you know.

Moments after Hawking made the remark, Google reported a sharp increase in searches for the terms “demagogue,” “denominator,” and “Stephen Hawking.”

“For a so-called genius, this was an epic fail,” Trump’s campaign manager, Corey Lewandowski, said. “If Professor Hawking wants to do some damage, maybe he should try talking in English next time.”

In issue #1,900,445 of “politician puts foot in mouth,” the interim Conservative leader, Rona Ambrose, takes to criticizing Trudeau by ‘joking’ he is the “first female Prime Minister.”

In her speech, she mentions a not unfair history of prominent Conservative women in Canadian government. Yes, it’s true, the Conservative party has had a few female leaders. That’s great. Then she goes on to speak of the first female Prime Minister (Kim Campbell), interrupting herself with a ‘joke’ about how “You would think Trudeau was the first.”

Soooo in a speech about how your party empowers women, you decided the best way to take a dig at the PM is to insult him… by suggesting he is a woman.

People have accused me of being biased by saying I only cover Conservative stupidity. But guys, seriously, they make it so easy.

Do we still have to parse out how this “joke” is sexist? Ambrose, I’mma use the smallest words I know. Your joke works like this: