One common utterance you’ll hear when people go on the defensive about a racist statement or behaviour is that they couldn’t possibly be racist because they “have a black friend”. This “black friend” is sometimes a spouse, sometimes an actual friend, but just as often it’s a co-worker or someone they do business with, or maybe even someone who works for them. Whatever the person’s actual relationship with their “black friend”, they wish you to excuse a racist behaviour or attitude with the assurance that because they do not hate each individual black person on the planet, they are somehow safeguarded from having any of their behaviour identified as racist. This comes from the formulation that racism is something perpetrated by mythological creatures known as “racists”, a stance I unequivocally reject.

I have to say though, as common as the “I know and tolerate at least one black person” excuse is, this particular inversion of it is new to me:

The head of the Republican Party in Maine thinks there might have been voter fraud in his state because “nobody in town knows anyone who’s black,” but black voters came in to vote on election day. GOP state chairman Charlie Webster aims to find those who committed the alleged fraud fraud by sending thank you cards to voters, and seeing if they are returned to sender.

In an interview with an NBC affiliate, Webster said he was astounded by the “dozens, dozens of black people” who voted, and thought it was odd because he personally doesn’t know anyone who knows a black person in town:

In some parts of rural Maine, there were dozens, dozens of black people who came in and voted on Election Day. Everybody has a right to vote, but nobody in town knows anyone who’s black. How did that happen? I don’t know. We’re going to find out….

“I’m not politically correct and maybe I shouldn’t have said these voters were black, but anyone who suggests I have a bias toward any race or group, frankly, that’s sleazy.”

This one is “I’m not ‘a racist’ because I don’t know any black people”, which you have to at least admire for its boldness.

First, I have to boot-fuck this last sentence. It’s not “sleazy” that people are noticing how fucking racist this statement is. It carries with it the assumption that black voters in Maine deserve some particular scrutiny because, hey, you know how those blacks are (more on this later). It’s not a ‘dog whistle’, it’s a siren. Also, the problem here isn’t that you weren’t “politically correct”, Mr. Webster, it’s that you were not factually correct. Maine has black people. Yes, even in the “dozens”.

But let’s look at perhaps the most laughably, nakedly, obviously racist assumption at play here. Mr. Webster’s evidence for voter fraud is a combination of two things: first, that there were black people in Maine, and second, that because he personally doesn’t know any black people, they must therefore be foreign frauds.

The term “visible minority” is one that carries a great deal of ironic baggage in many areas. The obvious connotation is that you can tell, by simple visual inspection, that a person is a member of a demographic group that is not part of the majority. The irony enters into the conversation when you realize that, in many places, the existence of these people is erased or otherwise completely neglected when we think about “America”. African-Americans (and other hyphenated American groups) are often placed in positions where they are ‘technically’ citizens, but Americans for whom their race is their single most important defining feature. I talked a bit more about this in a previous post, but the take-home message is that the contributions and participation of Americans (this being true for Canadians as well) of colour is often omitted, save for those times when they are doing something specifically to advance the rights of their racial group.

The fact that the Republican party state chairman in Maine doesn’t personally know any black people is not evidence that black people don’t live in Maine. Maine is about 1.1% black, meaning there are somewhere around 14 thousand black Mainers (or, if you prefer, 1200 dozen). The fact that Charlie Webster doesn’t know any of them doesn’t necessarily mean that they don’t exist. It’s far more likely, in my estimation, that due to a total lack of Republican outreach to the African-American community, rampant racial segregation all across the country, and the usual neglect that an overwhelming white majority has of small and therefore non-exploitable minority groups, what we’re seeing here is a simple case of confirmation bias. There’s also the possibility that black folks are just avoiding racist-ass motherufckers like Charlie Webster, but I wouldn’t presume.

What I will say is that this fits neatly with the larger Republican narrative from this last election cycle: that black people voting is suspect for fraud. That black people have to provide additional proof that they are indeed qualified to vote. In the old days, this was done through explicit policies like poll taxes and “literacy tests”. Today it’s done through barely-covert policies like “voter ID” that is designed to suppress the votes of not only black people, but pretty much anyone who would vote for a Democratic candidate. This is not a new story, and it is part of the attempt to erase people of colour from the collective consciousness, or at least to deny them (us) the possibility of equal partnership and participation. This story is not new, and it’s not just chuckle-fucks like Charlie Webster who are behind it.

Mr. Webster, however, is determined to get to the bottom of the mysterious phenomenon of black people existing. He’s going to send out postcards to everyone he suspects wasn’t a “real” voter. If I got one, I’d return it to sender as well, with a nice big ‘Fuck You’ written on it. 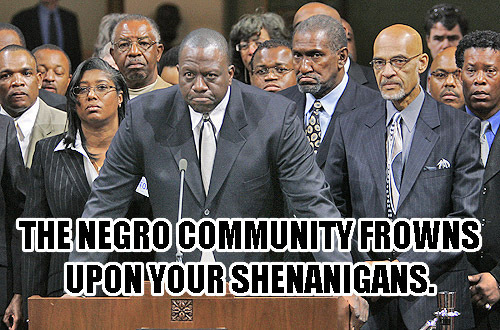 Movie Friday: Suspicious » « Because Abortion needs to be explained, apparently.