One fascinating historical narrative from the United States is called “white flight“. Essentially, this was a mass migration of white Americans out of major urban centres, into the suburbs. As with previous mass migrations of white folks in the USA, this was the result of various factors as kind of a ‘push-pull’. The ‘pull’ was the increased affordability of housing thanks in a large part to the GI Bill, as well as massive federal investments in transportation infrastructure and electricification*. The ‘push’ was multifaceted – cities were crowded, dangerous, and dirty – but it would be naive to assume that racial dynamics did not play a major role.

Whatever the causes of white flight, it is worth noting that one of the effects of it is that our whole notion of what the suburbs mean and are is inherently tied up in whiteness. The oft-invoked Rockwellian image of the suburbs is white because that’s who got there first and defined what that meant. And, just as we saw in yesterday’s examination of the impact that racist ideologies from our founders had on generations of immigrants, the ‘whitening’ of the suburbs at the hands of government subsidies have far-reaching effects that outstrip the mere fact of the legislation. The suburbs are white because they got there first, and anyone who comes after and doesn’t comport to that image and behaviour is ‘doing it wrong’.

That being said, shifts in economics, immigration, policy, politics, and the very character of race relations in the United States have made it increasingly possible for people of colour (PoCs) to move into suburban areas, which has led to new possibilities: 1) suburbs that are a mixture of whites and PoCs, or 2) suburbs that are populated predominantly by PoC. A report by the Institute of Metropolitan Opportunity at the University of Minnesota Law School examines this phenomenon and gives us some insight into some fascinating and relevant results.

Things that probably won’t surprise you

Predominantly white suburbs (comprising 18% of the population of the metro area they were in) were wealthy and stable, leaned Republican and had low levels of poverty. Predominantly non-white** suburbs (12%) were much the opposite, with high levels of taxation relative to income and poverty; and had low incomes and housing prices that were in decline. 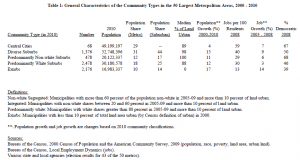 Diverse communities, on the other hand, were thriving nearly as well as predominantly white communities. It turns out that segregation is part of the reason why predominantly non-white communities fail, not the simple fact of their racial homogeneity. The authors point to extensive evidence suggesting that integrated communities (particularly integrated schools) provide major opportunities to children of colour, while taking nothing away from their white classmates. Indeed, the authors argue that “integrated schools also enhance the cultural competence of white students and prepare them for a more diverse workplace and society.” Whether or not that is true, the fact is that integrating schools help close racial achievement gaps and has the added bonus of increasing the likelihood that PoC will pursue occupations as adults in which PoC are traditionally underrepresented. The cited evidence also suggests that integration of schools leads to an increased likelihood that white students will pursue interracial friendships, and have a increased sense of civic engagement. Everyone wins!

Another interesting fact of integrated communities is that they tend to be remarkably politically balanced, with an even split between Democrats and Republicans. The authors suggest that this provides more opportunities for meaningful political engagement, which I’m not so sure about, but it seems reasonable to assume that a diversity of political opinions among your peer group will reduce levels of group-think, which is always good. The authors also suggest that these suburbs will become hotly-contested prizes in political contests – a supposition not much evinced by the current political climate. The question that popped into my mind is whether the mix within the community is caused by increased integration (i.e., does living in a racially integrated environment moderate political opinions, many of which are racially charged), or is it merely an effect (i.e., PoC trend toward Democrats, white people tend toward Republicans, so any mixing will ‘moderate’ the population as a statistical artifact).

Temporal trends suggest that racially diverse neighbourhoods, for all their promise and benefit, tend not to be as stable as segregated communities. Over time, diverse communities exhibit a higher tendency to turn into either predominantly white (2%) or predominantly non-white (16%). 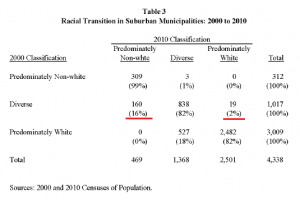 This suggests, at least to my eye, that a secondary form of ‘white flight’ is occurring, out of areas with a significant population of PoCs and into segregated communities. The differential rate of population change from Diverse -> non-white vs. Diverse -> white is underscored by the fact that predominantly white communities integrate at a much greater rate (18%) than predominantly non-white ones. All of this is highly suggestive of a phenomenon wherein PoCs are moving into white enclaves and diversifying them. Interestingly, there is very little evidence to suggest that white people are ‘gentrifying’ non-white suburbs – predominantly non-white suburbs “virtually never revert to predominantly white”, even over a 30-year timeline. It should also be noted that once a suburb becomes predominantly white, it tends to stay that way.

The ‘magic number’ for a diverse suburb to become a predominantly non-white one appears to be 23% – once an area is 23% non-white, it is more likely to become resegregated than to remain diverse. There appears to be an upper threshold of ‘tolerable’ diversity for white suburbanites, and it’s pretty low: 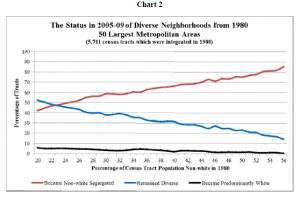 The question that you’re probably asking yourself is whether this segregation is simply “folks want to live with people who look like them”. The answer to that question will have to be its own post. Spoiler alert: the section headline for the answers could be titled “Things that are likely to enrage you”.

*Which, incidentally, is why the popular contemporary ‘bootstraps’ myth of the relative wealth of white Americans is a total farce. The government gave metric assloads of “handouts” to white Americans, who have since tried to block any and all attempts to see the same investments made in Americans of colour.

**While I don’t like the term ‘non-white’, I will adopt their nomenclature for the sake of consistency.

White “flight”? Not exactly » « The past is not passed