I remember my first job interview. I had applied for a position as a stock boy at a bulk food store, and the owner called me on the phone the day after I dropped off my resume. My interview was one question, three words: “are you big?” I replied that I was, indeed, big. “Come in and start tomorrow,” was the reply. I was there for nearly 3 years. Since that time I’ve taught violin, I’ve packed boxes onto trucks, I’ve managed an amusement park cleaning crew (easily the worst job I’ve ever had), I’ve been a doorman, a karaoke host (easily the best job I’ve ever had), and spent two mortifying shifts serving tables in a tapas restaurant. None of those jobs were particularly hard to get – in fact, when I was offered my current job I could scarcely believe it and spent the first year dreading the day when my boss would realized they hired the wrong guy.

At no point in my various job searches did I really actively stress over race. Like most people I’ve been rejected from more jobs than I’ve been given – even then, it never occurred to me to wonder whether or not race played a role. Why would it? After all, I live in the 21st century, and certainly nobody ever said to me “we don’t hire your kind” or anything so overt as that. I will likely never know the role, positive or negative, that race played in me getting my various jobs. However, I know too much to think that racism isn’t still very much a part of the hiring process:

In contrast to public opinion that assumes little influence of discrimination on labor market inequality, we find that black job applicants are only two thirds as successful as equally qualified Latinos, and little more than half as successful as equally qualified whites. Indeed, black job seekers fare no better than white men just released from prison.

A team based out of Princeton University sent a group of ‘testers’, matched for quality of speech and personal presentability, to apply for jobs with a variety of prepared (fictitious) resumes. The testers had a variety of ethnic backgrounds – one white, one Latino, and one black – and were sent to observe not only the rate of ‘success’ when applying to each job, but also the types of interactions the had with the prospective employers.

The results were, if you’ve been reading this blog for any appreciable amount of time, entirely predictable: 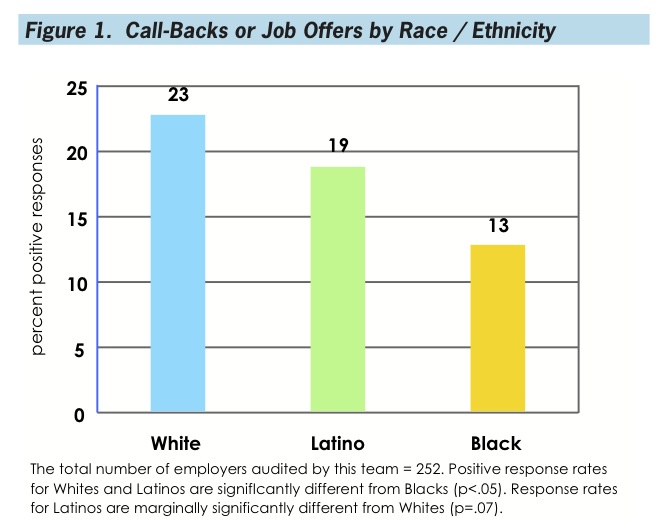 Keep in mind, this isn’t in a backwater hick burg in rural Alabama – this is New York City. Even then, being white gave a 10% advantage when applying for entry-level positions, even when qualifications and ostensibly all other potential explanations were experimentally controlled for. Simply being black and male meant you were walking in with a disadvantage? How meaningful a disadvantage? The study goes on to describe a result wherein the white applicant, his resume adjusted to reflect a recent criminal conviction, had the same success rate as the black candidate with a clean record. Essentially, for employers in New York, to be black is to assumed to be a criminal (a prejudice that is certainly reflected in police policy).

The important thing to remember is that, at least in most cases, racism was not an obvious factor in rejection. In fact, both the Latino and black testers reported experiences that seemed sort of positive – they were told that the position had just been filled, but that something might come up soon so they should leave a copy of their resume for future reference. This is reflective of how most people go out and apply for work – they don’t compare and contrast their experience with friends who have similar qualifications but different ethnic backgrounds. They certainly don’t do this over the span of more than two hundred jobs.

Of course, if we did, we might find out some truly disturbing behaviours: 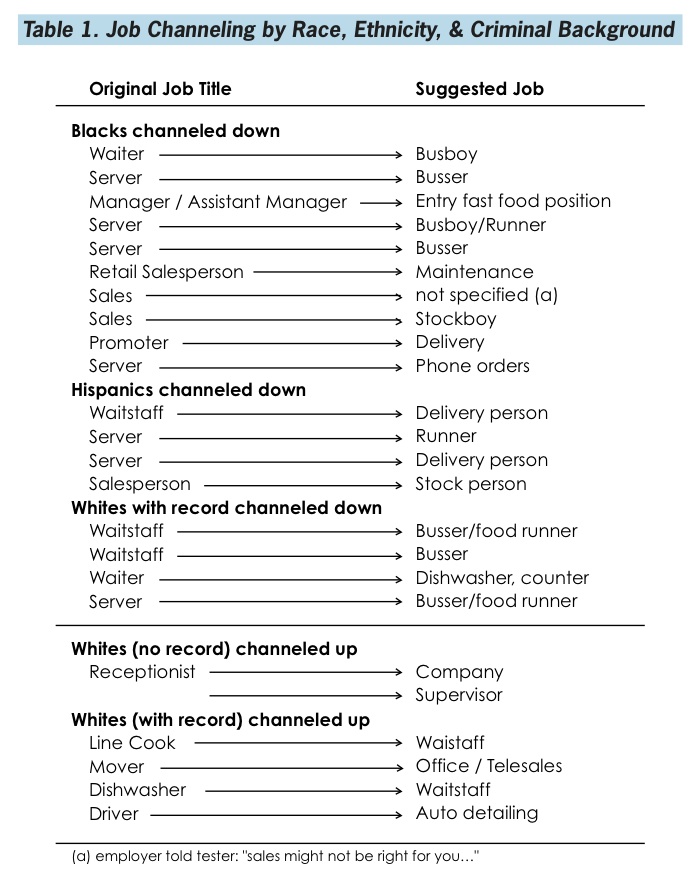 So I don’t usually get surprised by these kinds of results, but I didn’t even realize “being talked into a better job than you’re applying for” was a thing. I’ve certainly moved up after I had been hired for a lower position on the ladder. I’ve had employers tell me that they think I’m ready to take on more responsibility. I’ve never even heard of someone being offered a better job than ze was looking for. But apparently if you’re in New York, it happens – so long as you’re white. The suspicious part of this (and the reason why I encourage you to treat this finding with extra skepticism) is that this phenomenon is seen most often in the candidate with the criminal record, which is an odd finding.

We know well that racism lives and thrives in economic spheres beyond the mere fact of employment, and while we Canadians often feel smug in comparison to our Southern neighbours, our superiority is grossly misplaced. It’s worth noting, though, that employment and vocation are not exclusively financial realities. What we do for a living is, at least in North American culture, a reflection of our value as people. A system which disproportionately denies employment to racial minorities also denies them status and membership in society; the same society that bloviating morons like Newt Gingrich then belittle members of those minority communities for not succeeding in.

There are a number of short-term solutions to this process that I could get behind, a blinded hiring process being simplest among them. However, the larger fix to the pervasive, veritably metastatic problem of racism in our modern society cannot be addressed by any policy or legislation. We have to unblind ourselves to the reality that racism (and other prejudices, to be sure) cloud our everyday decision-making. We have to accept the fact that racism can happen without any conscious intention, and that even good people like us are susceptible to it. Most of all, we have to learn how to not be afraid to talk about race, and we have to listen to those on the receiving end who are so often ignored.

Suffice it to say, we’ve got a lot of work to do.

Because I am an atheist: M » « SSA Blogathon songathon: Levon