First off, I want to apologize for shirking my duties this past week. I squandered my weekend, when I should have been writing the posts for last week, doing other stuff. When Monday came around, I had decided to write a post-mortem on the election after the results were in. However, by the time I got home from working at the polls I was so tired and disgusted with the outcome that I couldn’t really marshal my thoughts enough to write anything that I could feel good about. This is the reason why I usually set up a buffer of posts, so as to avoid this exact type of thing.

Secondly, I find it troubling that the week that I decide not to post, my hit count explodes 😛 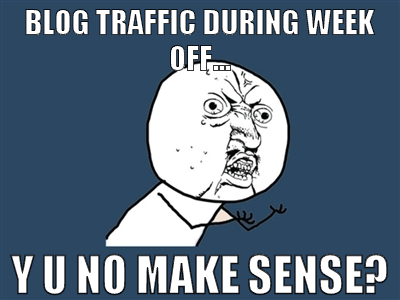 Finally, this post is going to be a sort of amalgamation of some thoughts that have been kicking around my head for the past week since the election. I’ve titled this post ‘mining a silver lining’, because while it pretty much goes without saying that I am disappointed and fearful about what it means that the Republican North party has a legislative fiat (both in the Parliament and ostensibly in the Senate), I think there are some real good news stories to come out of the election. The political content of the archives of this blog should be sufficient to explain why a Republican North majority is a bad thing for Canada; I will instead focus on some good news speculation.

ALL THE PROGNOSTICATION MEANS ABSOLUTELY DICK

There will be a lot of political commentators (myself among them) who will make predictions about what will or won’t happen under a Republican North majority. The sheer variety of opinions and predictions ensures, mathematically, that most of them will be wrong. Political decisions are influenced by ideology and promises, but occur on a day-to-day basis and are affected by human events. Nobody can predict exactly what human beings will do, as this world is a chaotic place. Nobody would have expected U.S. foreign policy to make a dramatic series of shifts based on events in the Middle East and Northern Africa. Fewer still would have predicted that Japan’s economy would take a tumble after an earthquake and resultant nuclear accident.

My point here is that no matter who makes the predictions, policy will adapt to the the immediate circumstances around it. Changes in technology, in climate, in foreign politics, in any number of things will have a strong influence on how Stephen Harper’s policy decisions will be made. Trying to predict specific actions over a four-year period is a complete waste of time, and can be enjoyed only as an intellectual masturbatory exercise.

Now I will commence to fapping.

STEPHEN HARPER IS THE LEADER OF A DIVIDED PARTY

The Republic North party is made up of two core constituencies: social conservatives and fiscal conservatives. The perhaps unspoken (or certainly under-spoken) reality that accompanies such a grouping is that while they may claim to be related ideologies, the two are in fact orthogonal. There is nothing in the doctrine of social conservatism that lends itself to fiscal conservatism – in fact the two are often at cross purposes. Libertarians and Classical Liberals believe that the government has no business whatsoever legislating either social issues or economic issues – only in safeguarding individual liberties. The reason the Republican North party was able to pick up so much support is because they catered to the economic centre/right, which is also a part of the Liberal party’s core constituency.

The only way (as far as I can see) that the RNP was able to stitch these two groups together was to simultaneously forge a false equivalence between these two perpendicular political perspectives, and to publicly proclaim disinterest in social policy while quietly whispering assurances to their social base that those issues would come to the fore once a majority was achieved. Now that this is a political reality, Prime Minister Harper will have to ‘pay the piper’, so to speak, by advocating positions that are wildly unpopular among the Canadian majority. If he fails to do this, social conservatives who have long felt ignored by the federal government will abandon the RPN and revive the Reform party. Should he capitulate to their whims, he will alienate the Libertarian/Classical Liberal wing of his party.

This must be a deft balancing act that will take an extraordinary statesman and leader to accomplish. Stephen Harper is neither of these.

JACK LAYTON MAY EXERCISE A GREAT DEAL OF CONTROL

Part of the success of the RPN during their successive minority governments was Stephen Harper’s ability to keep the reins of his party tightly held. Information did occasionally leak, but for the most part the government spoke from one perspective only. Considering the number of wingnuts in the party, keeping that communication clamped down was an extraordinary achievement that served the party’s interests well. Jack Layton may be able to exercise the same kind of party discipline, albeit in a dramatically different way.

Nobody really predicted that the NDP would make the strides they did in this past election (owing largely to Quebec, but also partially due to the implosion of the Liberal party). Jack Layton now finds himself the leader of a party with 102 seats, many held by rookie politicians. The NDP brand has been, since the early 2000s, consistently centred on Jack Layton himself, rather than a particular policy position. The rookie MPs will be looking to Mr. Layton for guidance and instruction, more so than would a team of seasoned veterans. While Jack will have to pull in some of his own wingnuts and handle more than the ordinary number of blunders born of inexperience, he will also have a party that gets virtually all of its cues from him. In this way, the NDP can appear more organized and credible than they legitimately are. This means that progressive decisions and policies can be articulated without seeming like they’re coming from the hippie fringe.

ELIZABETH MAY WAS ELECTED

I am not a Green voter. I did vote Green in 2006, because my riding was a safe bet and I supported electoral reform. I think the Green party can articulate a non-corporate perspective that is sorely and noticeably absent from the other three major parties. Elizabeth May is a gifted speaker and is able to articulate environmental policy issues well. She’s also shown herself to be indomitable and highly resistant to intimidation in the face of overwhelming opposition. While I don’t necessarily agree with her party’s platform on many issues (medicine and health care being chief among those), I am glad to see a more pluralistic Parliament.

Her election also serves the purpose of giving the Green party legitimate political status. Voting Green is now a legitimate alternative, and while the party is still in its infancy in terms of credibility, having elected an MP (over a RPN cabinet minister, no less) certainly vaults it into the standings. After all, they only have 3 fewer seats than the Bloc, who used to be the official opposition 😛

POLARIZATION IS BAD, BUT NOT ALL BAD

One doesn’t have to look much further than the United States (a name that is becoming progressively more ironic) to see how dangerous political polarization can be. Polarization forces people to make choices to support positions they don’t agree with in the name of party affiliation. Having a plurality of perspectives means that government will be more stable, rather than erratically jerking back and forth from right to left. Canada has elected a far-right government with a far-left opposition (although I don’t think either of those descriptions are really fair in the general scheme of things), meaning that for the first time in a long time we see a stark separation between the usually moderate people of this country.

However, there is one upside to polarization that has to do with a necessary consequence of good government. When the government is largely running things behind the scenes and caters to the will of the majority, people become complacent. Why bother getting up in arms about a government whose actions are largely invisible and that I agree with for the most part? Having the debate happen more to the extremes, with policies to match, means that government activity will become increasingly salient to the average Canadian. People will see that their actions (or inactions, as the case may be) can allow dangerous legislation that is contrary to their personal interests to be passed largely without comment. Perhaps having a RPN majority government is what Canada needs as a kick in the pants to spur increased political involvement by its populace.

As I’ve made clear, I’m not happy about this election. My best-case scenario would have seen a diminishing Harper minority with a strong NDP opposition – allowing the further fragmentation of the right and bringing progressive issues to the fore. What I got instead was a bizarro world in which a 2% increase in political support for the RPN means 30 more seats and the Bloc has all but evaporated. It is an interesting time for Canadian politics, and while there will undoubtedly be some serious damage done in the interim (I’m thinking specifically of crime, climate change and the strength/direction of the Canada Health Act), there may yet be some positive stories to come out of this.

I am back to my regular self, and am recommitting myself to articulating my position. I promise – no more weeks of rage (well… hopefully).

Believers are still out there » « Atheist bus ads get raptured