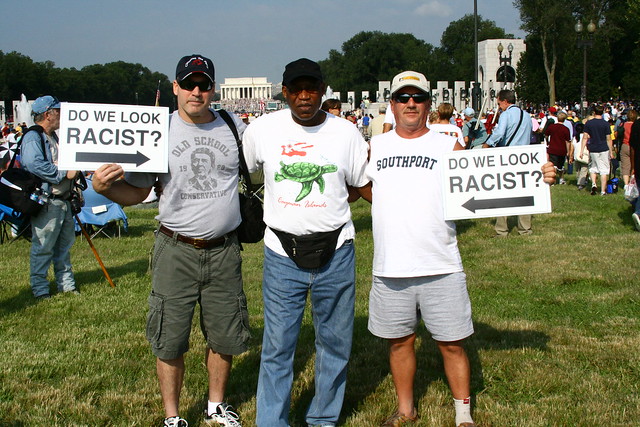 I laughed my ass off when I saw this. That being said, obviously not everyone in the Tea Party is there because they are racist – smaller and more efficient government has nothing at all to do with race. However, due to its stubborn opposition to any program designed to level the playing field or correct for historical injustices, it tends to attract the racist fringe with open, monochromatic arms. In the same way that supporting a larger role for the federal government isn’t a gay thing, but homosexuals tend to fall on the left side of the political spectrum (because that’s where all the equal rights are).

A commenter pointed out something that didn’t occur to me right away: how racist do you have to be to print out signs and go looking for a black person? I’m trying to imagine their thought process:

“Okay, so we’re going to print out these signs and take them to the rally, right?”

“Yeah, that’ll show all those liberals that the Tea Party is about state’s rights and small government, not a thin veneer of politics hastily brushed over a rotten core of deep-seated xenophobia, unwarranted entitlement and good old-fashioned ignorance!”

“Thanks. I read the New York Times today, and just said the opposite of what was written there.”

“Wouldn’t it be easier to just take these signs over to the houses of one of our many black friends and/or work colleagues and/or neighbours, rather than having to sleuth around at a rally to find the token fanny-pack-wearing dark-skinned guy at a rally of thousands of white people?”

“We don’t have any black friends and/or work colleagues and/or neighbours, Larry.”

“Uh… because of LIBERALS!”